The process of viticulture is essentially the same the world over. Grapevines must be cultivated by whatever means, either growing unsupported as a gobelet or bush vine, trained up stakes or pergolas, as seen in some Italian and Portuguese vineyards, or trained along wires, in regimented rows. This latter method gives us the classic image of the vineyard as seen across much of Europe and the New World. To explore every detail of the approach to viticulture as it pertains to the Loire Valley, however, picking apart every scientific and philosophical detail of the work in the vineyard, would give us enough material to fill an entire book. This is clearly beyond the scope of this guide.

The aim of this section of my guide to the Loire Valley, therefore, is more limited. I explore here selected aspects of viticulture as it pertains to this region.

Taking a very simplistic approach, it has always seemed to me that viticulture is a coin with two sides. On one side we have the processes involved in achieving the best possible quality in the fruit. This begins with choosing where and how to plant your vineyard, and continues through to detailed management of the leaf canopy during each growing season, followed by deciding when and how to pick. In an ideal world, this would be all the hard-working vigneron would have to worry about. But of course this is not the case, as on the other side of the coin we have the many vine diseases that drive much of the work in the vineyard. These diseases include everything from the infamous phylloxera, through well-established diseases such as the various mildews, as well as less commonly discussed afflictions such as esca and eutypa dieback. Other diseases, meanwhile, such as Pierce’s disease and acid rot, wait in the wings.

As with my guide to viticulture in Bordeaux, I look first at these diseases which drive so much of the work in the vineyard, before proceeding in my next instalment to look at the different philosophies of work that can be employed, from the wholly conventional through to biodynamics. In doing so it seems reasonable to turn first to phylloxera, the most infamous of all vine diseases. Sadly, the Loire Valley is no less prone to this disease than any other wine region.

The affliction arrived in France during the 1860s, most probably in 1862, imported on some American vines planted in Roquemaure, close to Lirac and Tavel on the banks of the Rhône, by a curious wine merchant and amateur botanist by the name of Monsieur Borty. The first report of vines yellowing and dropping their leaves, the beginnings of a slow death, came from some nearby vineyards the following summer. It seems likely, however, that there was at least one other point of entry to the country. By the mid-1870s the disease was well established in the Midi and the Rhône Valley, but by this time there was also a distinct and well-established attack in Bordeaux and Cognac. Over the ensuing decade the disease spread across France, reaching the Loire Valley during the late 1870s. The disease was first reported near Vendôme in the Loir-et-Cher département. 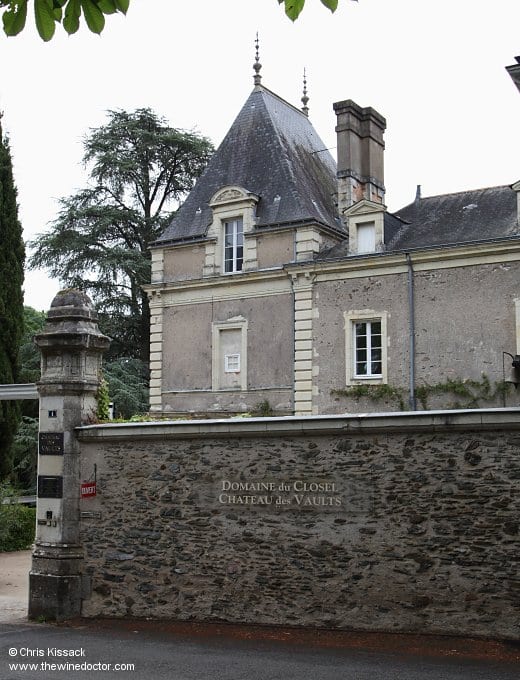 Within the Loire Valley the disease spread quickly, although it was some time before it had reached every corner of the region’s vineyards. Some regions did not report the arrival of the louse until the 1880s, in the case of a few appellations it was not until the 1890s that their vines were hit. Of course, by this time, many treatments had been trialled (and largely seen to fail) and the accepted ‘cure’ of grafting onto American rootstock was well on its way to becoming the accepted norm for all French vineyards. As elsewhere, many regions contracted in size, and some disappeared altogether. Near the source of the Loire, in the Côtes d’Auvergne, the area planted to the vine peaked during the last decade of the 19th century at about 45,000 hectares. Once phylloxera took hold viticulture collapsed and never recovered; today there are just a few hundred hectares planted here, around the town of Clermont-Ferrand. Some other regions, particularly some sections along the upper Cher Valley, were entirely wiped out. While some persevered, trying their hand with American vines, or later with French vines grafted onto American rootstock, many just gave up, and turned to other forms of agriculture, mainly arable farming or forestry.