The Loire Valley has traditionally been regarded as the northern limit of commercial viticulture for still wines, but with global warming this view may soon be outdated. Of course there are more northerly regions where grapes are grown and wines are made on a commercial scale even now, most notably in Champagne, and these days we should not overlook the booming sparkling wine industry of southern England. It is a fact, however, that both regions rely heavily on winemaking techniques, specifically a second fermentation resulting from added sugar and yeast, as well as the subsequent sweetening effect of the dosage, to deal with the naturally high acidities and rather lower alcoholic potentials encountered in these cooler, northern climes. I appreciate that both of these wine regions do also turn out still wines, but they are certainly of secondary interest compared to the sparkling wines. With the Loire Valley, however, it is quite the other way around.

That is not to say that the Loire Valley does not have an impressive sparkling wine industry of course, as it does. Its headquarters is in Saumur, and there are distant outposts in Vouvray and Montlouis, and across the many communes eligible for the Crémant de Loire appellation. Famous as some of these appellations are though (Saumur is second only to Champagne in terms of volume of production of sparkling wine in France), the Loire Valley is much better known for its great array of dry wines, from the Atlantic’s minerally Muscadet all the way up to the vibrantly flinty-smoky wines of Sancerre and Pouilly-Fumé. There are the vineyards of the Upper Loire as well of course, but being several hundred kilometres further upstream and halfway to France’s Mediterranean coast these naturally enjoy a warmer climate. They are not typical of the Loire Valley, which is predominantly a cool-climate region.

Latitude therefore has an obvious influence on the success of viticulture here, but so too does longitude. Those vineyards close to the Atlantic coast enjoy a more maritime climate, while inland – and Sancerre is as close to the centre of France as you need to be – the climate is more continental. And of course the river itself has some effect. Here in this instalment to my guide to the wines of the Loire Valley I will look at these two major influences in turn, before concluding with a few words on climate change.

As is the case with several wine regions in France, most vineyards tend to be planted in close proximity to the rivers, either along the banks of the Loire or one of its tributaries. As most of the major tributaries flow in from the south the majority of vineyards – in particular Montlouis, the Touraine appellations, Chinon, Bourgueil, Saumur, Anjou and its sweet-wine enclaves and most of Muscadet – are spread out to the south of the river. Some lie on the north side though, including Savennières, Vouvray, Jasnières and the Coteaux du Loir. 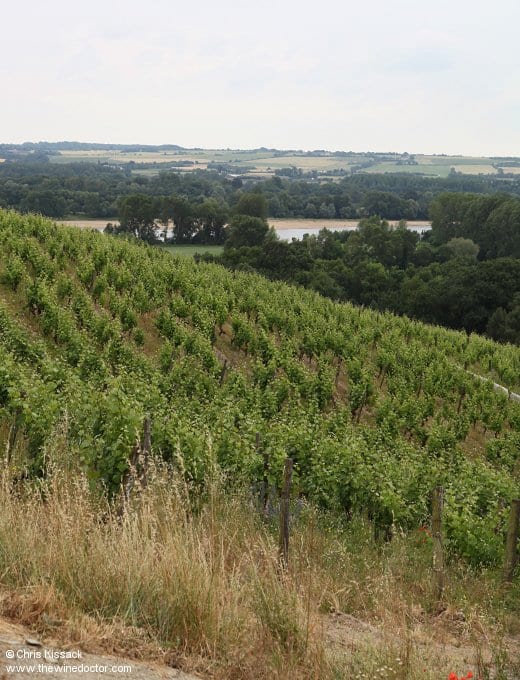 This is a northerly cool climate wine region, and so the position and aspect of any particular vineyard can have a significant effect on how the fruit ripens. In many cases the best sites are found on beneficial south-facing slopes (which often means on the right bank of whichever river is relevant) but that is not to say north-facing slopes are not planted up. It is just that these may well have to be picked later to ensure ripening. Two very good examples are the Clos de la Dioterie and Clos du Chêne Vert, vineyards belonging to Charles Joguet which sit on opposite banks of the Vienne. Despite being the two top vineyards in the portfolio, the south-facing Clos du Chêne Vert is always the first to be picked (even before the fruit from all the ‘lesser’ vineyards) while the north-facing Clos de la Dioterie is always the last to be picked. In this northern clime, when the harvest is often carried out in the face of advancing rains, parcels that demand late picking can cause problems.