After my more detailed two-part examination of white winemaking in the Loire Valley, I took a rather more selective approach when it came to the sparkling wines. I chose to focus purely on specific aspects of sparkling winemaking as it pertains to the Loire Valley, namely the méthode ancestrale, the basic technique behind the style we know today as pétillant naturel.

In these next instalments, in which I look at the vinification of red wines in the Loire Valley, I have decided to take the same approach. I have already explored the basic principles of red wine vinification, from the process of picking to selection and destemming, and then from fermentation and maceration to the élevage in my Bordeaux wine guide. The process is, on a very basic level, the same in the Loire Valley, with many of the same questions being asked along the way. Should the vigneron pick by hand, or by machine? What are the best methods for sorting and pressing, and which are the best materials for the fermentation vats? How long should the élevage be, and should he or she fine and filter the wine, or undertake just one of these processes, or perhaps do neither? How much, if any, and when, should sulphur dioxide be adde?

Of course even looking at all these aspects of winemaking, this is still a very superficial overview of a subject which many young vignerons spend years studying at the local viticultural lycée. There are countless possible permutations to these processes. We only have to look at the work of Sébastien David, who presses some of his grapes by foot, ferments in a crazy variety of vessels including concrete eggs, rotating barrels and amphora, emptying and refilling these different vessels at will, and who makes full use of carbon dioxide gas, utilising its ability not only to protect his embryonic wine from oxygen but also as part of a full-blown carbonic maceration that not everybody in the Loire Valley has read the Bordeaux rule book. Thank heavens.

In this look at red winemaking in the Loire Valley I therefore intend not to provide yet another overview of the basic rules of winemaking but to look in more detail at several techniques seen in this region but which I have not touched upon in my Bordeaux wine guide, or indeed anywhere else. The first methodology to come under under the spotlight I have already mentioned, and that is carbonic maceration.

It seems widely acknowledged that Louis Pasteur (1822 – 1895) was the first to notice that wines made with grapes fermented whole had a particular taste, different to the taste achieved with crushed grapes. It wasn’t Pasteur’s most famous experiment, bearing in mind that he was also largely responsible for disproving the theory of spontaneous generation (the notion that living creatures could somehow spring into existence from nothing) and he also determined that the fermentation of grape juice was a process driven by microorganisms, and was not mere chemical magic. Pasteur (pictured below) proved his scientific acumen by following the example of Francesco Redi (1626 – 1697), the father of the modern scientific method of controlled experiments with a study of his own. Into one bell jar he placed grapes with no protection from oxygen, while into the next he also placed grapes, but this time protected by a layer of carbon dioxide gas. 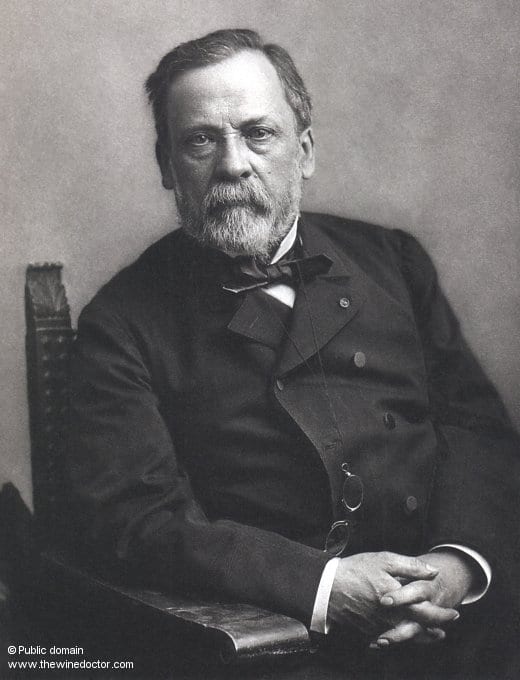 After a few days he noted that, although there was no evident fermentation (this was not a bubbling vat of grape juice, just grapes), the grapes under carbon dioxide gas tasted as though they had fermented a little, with a subtle wine-like character. They had indeed undergone carbonic maceration, and what Pasteur was tasting was some of the many distinctive compounds generated during this process, with perhaps 2% alcohol. The work undertaken by Louis Pasteur and others was continued by Michel Flanzy (1902 – 1992) a noted oenologist who wrote a seminal description of carbonic maceration in 1935. His son, Claude Flanzy (died 2014), continued this work until very recently. It is thanks principally to their efforts that we have such a full understanding of this process today.