After Cabernet Franc and Gamay, to where should we turn in the Loire Valley? Well, I have already taken a detour to look at Pinot Noir, based on my belief that, while the area planted to this variety is small, the quality of the wines merited a fairly detailed examination. So which other varieties come next?

I suspect some interested in the Loire might call for Côt, as I have heard this variety promulgated as the ‘next big thing’ in the Loire Valley before now. The wines are certainly of interest, but many of its positive features – good colour, good body, attractive perfume – mirror those also promised by Cabernet Franc. Côt is also something of an outsider in the Loire Valley; its origins probably lie in southwest France, in Cahors, from where it spread to Bordeaux (where it is known as Malbec, or as Pressac) and thus presumably also to the Loire. While I will certainly take a look at Côt, I would rather turn now to two varieties that perhaps embody the idiosyncratic diversity of the Loire Valley more thoroughly. Both are strongly associated with the region. One is Pineau d’Aunis, the variety of the Loir. First, though, we come to Grolleau.

The planting of this variety was once rather more widespread than it was today, having fallen dramatically from 11,400 hectares in 1958 to about 2,200 hectares when assessed in 2004. Thankfully since then the area planted seems to have held steady. Even with such a rapid decline, today Grolleau remains the third most-planted variety in the Loire Valley, after Cabernet Franc and Gamay (both of which have usurped it in some vineyards). 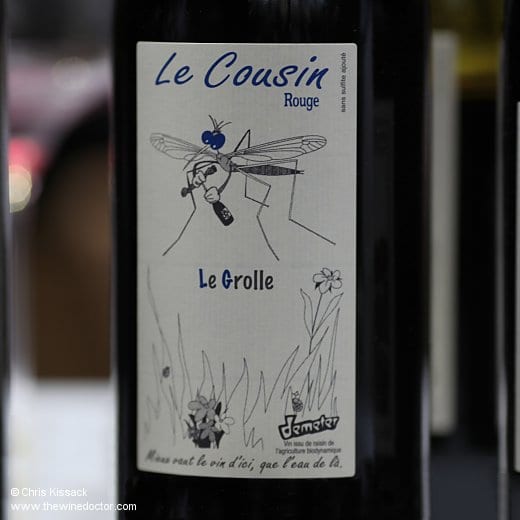 This decline in the planting of Grolleau was celebrated in The Oxford Companion to Wine (Oxford University Press, second edition, 1999), edited by Jancis Robinson, which stated that “…it is to the benefit of wine drinkers that it is so systematically being replaced…“. Robert Parker has gone on the record as saying Grolleau should be ripped up and replaced. Nothing makes me weep more than this march towards homogenisation in a region of such vibrant viticultural diversity.