It seems to be the case that historians and I hold very different views on François I. I have learnt, through undertaking one of the briefest periods of research possible, that historians apparently regard the promotion of ‘Renaissance thinking’ as being his most significant contribution to mankind’s story. In inviting the leading Italian artists of the 16th century, most notably Leonardo da Vinci, to work on his imposing hunting residence known as Château de Chambord, he unwittingly kickstarted a cultural and artistic revolution. The Renaissance movement swept through France, in doing so shifting it from a time of darkness, the Black Death and the Hundred Years’ War, into a new era of humanism and enlightenment.

At the same time, François I looked beyond his European enemies to distant lands, and in doing so he was the first French monarch to establish a foothold for France in the New World. He sent nobleman Jean-François de la Roque de Roberval to settle Canada and charged ship-owner Jean Ango to initiate trade with the East Asian nations. Closer to home, he forged links with Suleiman the Magnificent, tenth sultan of the Ottoman empire; this was a remarkable move for a Christian king, but both men had a common enemy, Holy Roman Emperor Charles V. Through his rule over Spain Charles V was already settling huge tracts of the New World, and his European empire encircled France, so no doubt François saw this as a valuable alliance. Modern historians certainly seem to think so. 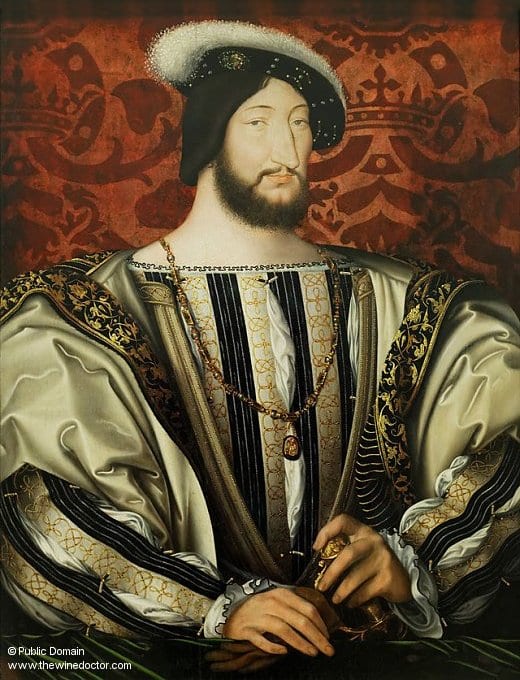 The Real François I

All of this is at odds with my own view of François I, so here are the facts that you really need to know. First, he was a gallant and bearded individual who was in possession of an impressive nose to rival that of Cyrano de Bergerac (indeed, during his life he was known to some as François au Grand Nez). Second, he built Château de Chambord as a hunting lodge (some ‘lodge’!), and so rather than forging international alliances I am sure he really spent most of his time galloping around on horseback, armed with bow and arrow, taking out boar and deer to the delight of his entourage, and generally looking quite kingly doing so. Thirdly, and this is the real achievement of his reign, I have long been familiar with the tale (an apocryphal one, perhaps?) that François I introduced the grape variety Romorantin from Burgundy to the vineyards near Chambord, today known as Cour-Cheverny, in 1519.

I think, on reflection, I have a pretty sound grasp of the most important aspects of the life of François I. What are all these historians twittering on about Renaissance thinking for?