This weekend saw, amidst the Bordeaux 2019 stragglers and the odd glass of Madiran (which reminded me that there are corners of the wine world which, despite giving much vinous joy, regretfully remain off my radar), I made another blindfolded foray into the realm of lees-aged Muscadet. Not literally blindfolded of course (although that would be interesting, especially if I had to start by locating my lone surviving corkscrew), more just a leap into the dark with a wine from yet another unfamiliar domaine.

The vineyards of Château Guipière are located close to Vallet, the lands here once in the possession of the seigneurs of nearby Pallet. The château itself was built during the late-18th century at a time when the architecture of the region had a strong Tuscan feel. This was due principally to the work of François-Frédéric Lemot (1772 – 1827), an architect who had spent much of his life working in Tuscany before being exiled to France. He called heavily upon his knowledge of the Tuscan style with his reconstitution of Clisson, razed to the ground during the Guerre de Vendée, and before long Tuscan-influenced villas and châteaux were popping up all across the region. 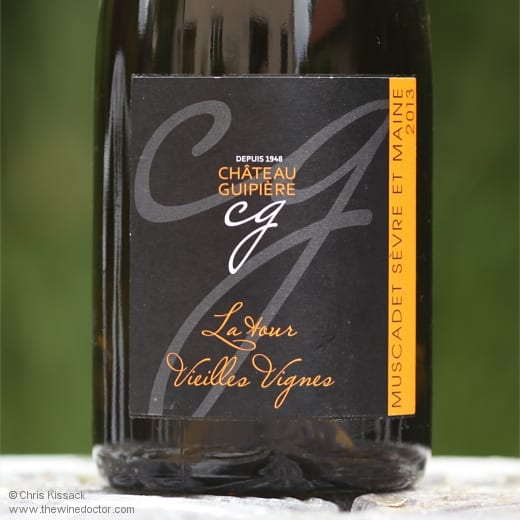 Sadly Château Guipière was destroyed during the mid-19th century, but the vineyards survived, and by the 20th century they were managed by Camille Charpentier. She passed them on to her sons Joel and Jean-Paul, before in 2015 they were acquired by Philippe Nevoux, who set Stéphane Gouraud to work looking after the vines and supervising the winemaking. He has 25 hectares of vines to play with, planted mostly to Melon de Bourgogne on soils of micaschist, although there is also some Folle Blanche and a few of the other commonly encountered varieties, in particular Chardonnay and Cabernet Franc.

The 2013 Château Guipière Muscadet Sèvre et Maine La Tour Vieilles Vignes originates from a 4.2-hectare parcel of old vines, aged between 45 and 60 years, situated at the heart of the domaine. The cuvée is named for an old tower, positioned within a nearby copse of trees, which overlooks the parcel. After a traditional vinification the wine was aged on its lees for eighteen months, exceeding the limit permitted for the sur lie designation (the limit being the December of the year following the harvest), hence it cannot claim the term on the label despite having plenty of sur lie character in the bottle. It has a very pale straw hue in the glass, and aromatically it impresses with some salty, minerally and flinty character, which underpins fresh layers of fruit expression, including tangerine zest, white peach skin, preserved lemon and apricot. The palate has a sense of purity and vibrancy, a succulent substance with streaks of pithy urgency and bright acidity. Delightfully pungent and mineral, long too, with a freshly defined finish, this is showing well but has some potential to develop in the cellar too. 92/100 (29/6/20)