The process that led up to this moment was a protracted one, having begun in 1988 with the Vins du Vignoble Nantais commission which was created in response to calls for a cru system. An expert advisory committee was formed in 1989, but work did not really get underway until 1995 when the committee began their fact-finding missions to the region. First they visited the vignerons to hear their rationale for the creation of the new crus, followed in 1996 and 1997 by visits to various terroirs and work to understand the various cuvées, any conclusions they made no doubt underlined by a series of tastings undertaken in 1998. As a result of the commission’s reports, the Institut National de l’Origine et de la Qualité (which, although the name has changed, is still referred to as the INAO) agreed, at least in principle, to the creation of a pyramidal hierarchical system with three levels, the first level (or premier niveau) being generic Muscadet, the second level (or deuxième niveau) being the sub-regional appellations such as Muscadet Sèvre et Maine and Muscadet Côtes de Grandlieu, the latter having only been signed off in 1994, and finally the third level (or troisième niveau) being a collection of smaller sites, each one known as a cru communal (pl. crus communaux).

By this stage many vignerons felt they knew what and where the crus communaux should be, and a number were producing prototype wines under proposed names, usually related to significant regional terroirs, such as Granite de Clisson. These names had no more legal status than any other cuvée name, but they helped to cement in the minds of their peers, and the commission, exactly how the crus communaux vines should be tended and how the wines should be made. In 2009 the Syndicat de Défense des Appellations Muscadet presented three dossiers for three proposed crus to the Vins du Vignoble Nantais commission. These went out for public consultation, the only changes that resulted from this process being slight modifications to the boundaries of two of the proposed crus. Once settled, the three new crus communaux, Clisson, Gorges and Le Pallet (the INAO having made clear that names based on terroirs, e.g. Granite de Clisson, were forbidden) officially came into being in 2011.

The cru communal Clisson sits in the extreme south of the Muscadet Sèvre et Maine appellation, stretching from the course of the Maine in the west, to that of the Moine, a significant tributary of the Sèvre, to the east. The vines are planted on slopes overlooking these three rivers as well as the Ruisseau de Chaintreau. Local vignerons regard it as one of the warmer terroirs of the Muscadet region, being slightly more distant from the cooling influences of the region’s great bodies of water such as the Loire itself, and the Marais de Goulaine. The defining terroir is granite, specifically Granite de Clisson, a large-grained rock rich in biotite and muscovite minerals. It is extremely durable, not particularly fissured, and the overlying soils are generally sandy, created by the weathering of the underlying granite. These soils warm quickly in springtime, and are typically well-drained. 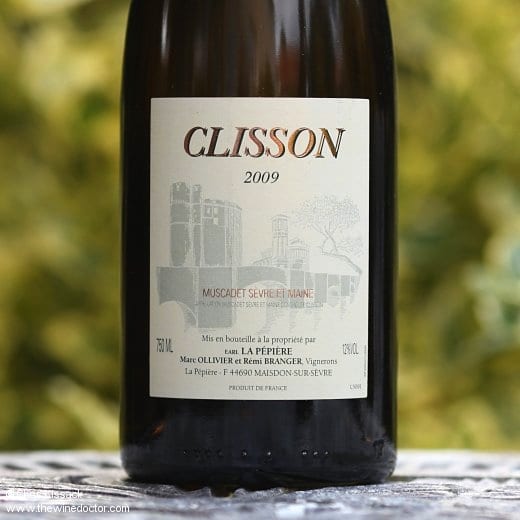 The cru communal is limited to the east, in St-Crispin-sur-Moine, to zone D4 on cadastral maps, which happily coincides with the limit of the Granite de Clisson. At the western end, the cru communal is limited to the north and south; to the north the boundary follows the faultline between the Granite de Clisson (to the south) and the Granite de Château-Thébaud (to the north), while to the south the boundary has been drawn between 1 and 1.5 kilometres from the faultline, essentially to include all the favourable terroirs. Running from west to east between these two extremes, this cru communal touches seven communes which run west-east, these being Château-Thébaud, Aigrefeuille-sur-Maine, Maisdon-sur-Sèvre, St-Lumine-de-Clisson, Gorges, Clisson and St-Crispin-sur-Moine. In each commune only well-defined sections are included, never the entire commune.