Although I recently described two serendipitous cellar-finds from the 2005 vintage, the Anjou Blanc La Lune from Mark Angeli and the Anjou Blanc Noëls de Montbenault from Richard Leroy, it has been a little while since I used my weekend wine report to focus on an older vintage. By ‘older’ I guess I mean wines from before the turn of the century, which in my cellar generally means the 1980s and 1990s (I am a little low on stocks of 1945 and 1921 Vouvray – by which I mean I never had any, and still don’t). Then this weekend my hand landed on this bottle, which I had originally brought up from the cellar for drinking last Christmas, and then I never quite got around to it. On rediscovering it, I naturally pondered whether or not now was the right time to open it. Several nanoseconds of contemplative introspection later I was scrabbling around for the corkscrew.

The 1996 vintage was a very fine one for the vignerons of the Loire Valley. The growing season was generally warm and sunny, the good weather persisting through late summer and into autumn. The temperatures during the day remained strong, while nocturnal temperatures were much lower, and the later season also saw some cooler north winds washing over the region. This combination of sunny days, cool nights and drying winds brought ripeness and aided concentration, while preserving acidity levels. While we could have a discussion about the merits of 1996 versus 1997, there is no doubt it was one of the best vintages of the late-20th century in this region. It was certainly the first strong vintage to come along after 1989 and 1990. 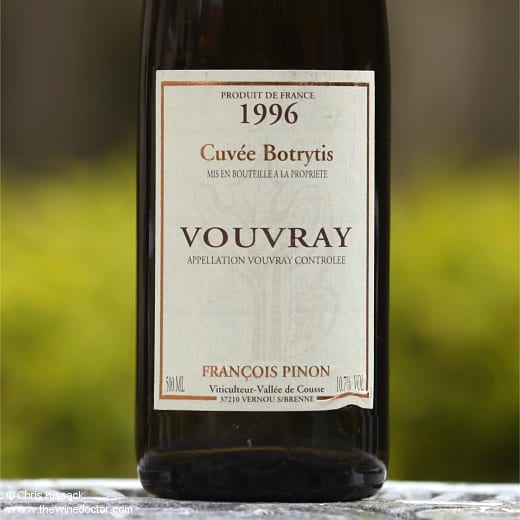 In Vouvray François Pinon took full advantage of the favourable conditions, producing several moelleux cuvées alongside his portfolio of sparkling, sec and demi-sec cuvées. Of these the most frequently encountered (in my experience) and thus perhaps the most widely appreciated is the 1996 Moelleux Première Trie, a wine I last tasted with François back in 2017. That cuvée is largely built around passerillé fruit, which unsurprisingly dominated with such a warm and relatively dry end to the season, botrytised fruit making up just a small percentage of the blend. Perhaps less well known is the 1996 Cuvée Botrytis, featured here, of which there was presumably a much smaller volume produced. I have never understood the relative obscurity of this cuvée in this vintage, because to my mind this wine is one of the greatest to have emerged from the Vouvray appellation in recent decades.

Yes you read that right. Alongside some of the appellation’s grandest wines, such as the 1989 Moelleux Réserve from Philippe Foreau, or the 1989 Cuvée Constance from Domaine Huet (note how with talk of great wines I have immediately gravitated back to 1989, a vintage I recently revisited in Liquid Gold Episode 2) I would readily place this week’s wine. It is the heady, thrilling combination of acidity, sweetness, botrytis complexity and most of all the ‘liquid stone’ minerality that lifts the 1996 Vouvray Cuvée Botrytis from François Pinon out of the realms of the merely brilliant into the more emotional. In the glass it maintains a moderate golden hue, in itself giving no strong clue to what awaits. The nose is beautifully defined, rich in the scents of sweet pear and dried apple, with threads of apricot, white raisin and white pepper, showing great polish, with botrytis-derived scents of praline and smoke. It offers up the pure essence of Chenin Blanc wrapped in a leafy Vouvray lift, but it also hints of the mineral joy that is to come on the palate. Here the wine is nothing less than electric, combining the sweetly botrytised flavours of dried fruits especially figs, apples and raisins with an incredible backbone of minerality, all grained and flinty, lending the wine a seam of pebbly substance. It holds a very pure style through the finish, where it feels intense, pure, focused, long and vigorous. This is a wine which shimmers with vibrant acidity and perfect balance throughout; it is, all in all, breathtaking. 99/100 (27/4/20)