There was a time before I knew little or indeed nothing of the lands beyond the boundary of the town of Vouvray. I had ventured as far as La Croix Buisée, where a road winds up the steep limestone scarp, coming out at the back of the vineyards of the première côte to the east of the town; that I was familiar with this little corner of the Vouvray appellation reflected the presence of both Domaine Huet and Domaine du Clos Naudin here. Further east, the town of Vernou-sur-Brenne, nestled in the valley of the Brenne between twin bluffs of the première côte, was unknown to me, its vignerons a mystery, its vines unfamiliar. The idea of turning up the valley and heading north towards Vaugondy, Chançay or La Vallée de Cousse seemed like a venture into the unknown akin to that undertaken by Conan Doyle’s Professor Challenger in The Lost World. I imagined the way forward curtailed by thick Jurassic vegetation and herds of lumbering sauropods, newly discovered by me on this isolated plateau.

Many years on from those early and rather limited explorations of Vouvray, when I merely wondered what lay along the Brenne and its tributaries, I have since driven to, walked through and even cycled around these valleys, many times in fact, because there are a number of domaines here worth visiting. As a consequence I must report, with some disappointment admittedly, that there are no long-lost dinosaurs walking up on the plateau, although there are plenty of marine fossils in the Turonian limestone underfoot; along the course of the Cousse, a tributary of the Brenne, these fossil-rich rocks are 94 million years old (the Lower Turonian). The valley slopes and plateau are rich in these cool limestone soils, peppered with hard flint, and Chenin Blanc planted on these soils yield very classic expressions of Vouvray. 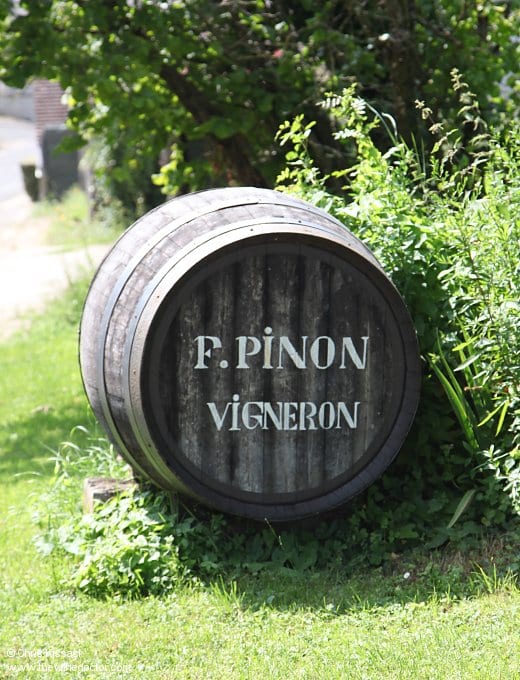 Significantly, there was just one domaine that drew me out of the town, prompting me to explore the upper reaches of the Brenne and the Cousse. The domaine in question was that of François Pinon.