At a very fundamental level, the process of winemaking is simple; the fermentation of the sugars in harvested grapes produces alcohol, as well as some other interesting flavours, to some degree depending on the yeasts. But even the briefest of closer inspections reveals that, for the 21st-century winemaker, this is an overly simplistic view. The conversion of grapes to marketable wine is now a multifaceted semi-scientific process (I say ‘semi’ as there are still a lot of unknowns, still a hint of mystery, and in some quarters a belief in winemaking as ‘art’). The sequence of decisions to be taken is potentially very complex, and there are many potential pitfalls along the way.

As a bare minimum, looking specifically at red Bordeaux now, made using the two Cabernets and Merlot, the harvested grapes must be destemmed and then fermented in a clean environment which also allows for control of the fermentation temperature. Anything less than this leaves the winemaker vulnerable to potential microbiological or chemical disaster.

Naturally most winemakers in Bordeaux go much further than these very basic requirements, and some fine tune to the most nuanced degree, the price of every bottle climbing just a little with every new decision made. The more you pay for a bottle, the more attention to detail it will have received (that’s the idea, anyway – I don’t think it’s always true, not by a long way!). This decision-making process begins in the vineyard and does not end until the wine is eventually bottled, perhaps two or even three years later. This section of my guide to Bordeaux looks at some of the decisions that face the Bordeaux winemaker. On the whole this section relates to red wine; although some of the aspects of winemaking described below can also be applied to the process of making white and rosé wines, I will look in more detail at these styles in the next section of this guide. 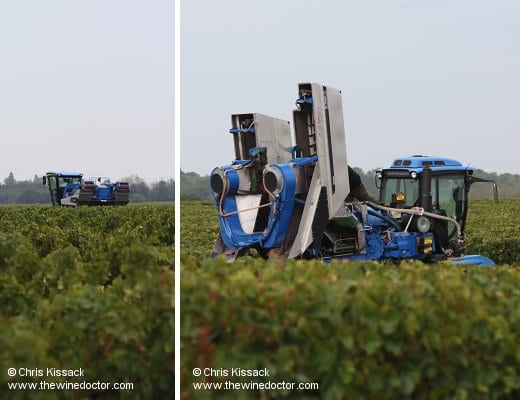 As with my canter through viticulture in Bordeaux this section of my guide is necessarily brief. As much (indeed, probably more) has been written on the details of winemaking, the chemistry, the yeasts, the pitfalls and the potential solutions, as it has been for the work in the vineyard. As a consequence a page such as this (or two pages, as it happens – I start below with Picking to Pressing, with Fermentation to Fining in part 2) can only provide the most superficial skim of the surface, although I hope it will describe some of the work that goes on in Bordeaux to the satisfaction of the drinking Bordeaux enthusiast. Those studying for examinations such as the Master of Wine qualification, or those working out in the field, will surely find the information presented below to be too basic for their needs. If hungry for more detail, I make a rather obvious recommendation for further reading at the bottom of part 2.