There are many facets to good vineyard management; how densely should the vines be planted, for example, and how high should they be trained? Opinion on both has changed much in Bordeaux in the past few decades, and many proprietors who have taken on estates languishing in unloved backwaters report having to raise the trellising and increase the planting density, the latter usually achieved by planting new vines between the widely-spaced rows already in existence. Both Gavin Quinney at Château Bauduc and Stéphane Derenoncourt at Domaine de L’A did exactly that following the purchase of their respective vineyards.

When you plant those new vines, what rootstocks (almost all vines in France are grafts, French scions grafted onto American rootstocks, the only guaranteed protection against phylloxera) should you choose? And once planted, will you be spraying chemicals, or will you work organically? Or even biodynamically? Do you want to work the soil with plough and hoe, tractor or horse, or would you rather plant grass between the rows of vines and then leave well alone? Or a bit of both? All are valid techniques, and each has its own list of advantages and disadvantages.

The point I am trying to make here is that for me to cover all the principles of vineyard management in any sort of detail would involve writing an entire thesis or textbook. Indeed, such theses and textbooks have been written. But not by me; I do not pretend to have the experience or knowledge to provide a discourse on every nuance of viticulture. What I will try to do instead is to give a broad overview of work in the Bordeaux vineyard, with a look at each of the major vineyard philosophies. Along the way I will point out where the philosophy in question is of particular relevance to Bordeaux. What this section of my guide will not do, however, is provide the sort of detail required for those sitting wine examinations, or who are actually working their own vineyard. But it might provide a few interesting pointers.

To understand the viticultural philosophies I explore on the next page, their risks and benefits, or perhaps just to put them in context, I should first start with a look at the disease burden that has been endured by Bordeaux during the past two centuries.

Bordeaux has certainly had its fair share of vine disease; the latter years of the 19th century saw the vineyards devastated, largely by pests imported from America on vine cuttings. Phylloxera was without doubt the most famous and the most devastating, hence its original name Phylloxera vastatrix, the ‘great devastator’. Over the course of a few years this tiny yellow vine louse advanced across the vineyards of almost all Europe, and all chemical treatments seemed (and indeed were) ineffective. Ultimately, the disease necessitated the grafting of French Vitis vinifera vines onto resistant American rootstock (typically – in the early days at least – Vitis labrusca or Vitis rupestris), a practice now almost universally carried out, certainly in Bordeaux. This saved the vineyards, although the vines remain afflicted, as demonstrated by these phylloxera leaf galls (pictured below) in a vineyard in St Emilion. 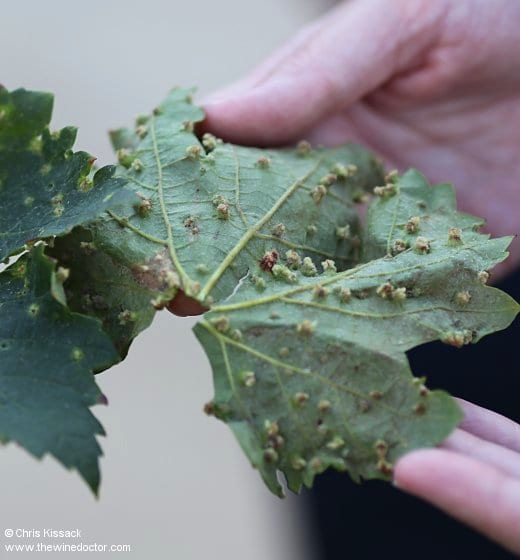 Other less infamous but no less invidious imported diseases included downy mildew, caused by the fungus Plasmopara viticola, and oidium (also known as powdery mildew), a disease that results from infection with another fungus, Uncinula necator. As with phylloxera, both were imports from America; ironically, in the case of downy mildew, it is quite plausible that the fungal spores were imported on American rootstocks rushed over as a potential solution to phylloxera. Both of the mildews have wreaked their fair share of havoc in the Bordeaux vineyard, although at least the chemical treatments that failed with phylloxera were effective here. The remedy for downy mildew – a solution of copper salts known as Bordeaux mixture – is of obvious interest to us.