Last week I published a series of 2016 Loire Valley reports, looking at more than fifty wines now that they have hit three years of age (well, a little bit more than three years in truth, but various recent events conspired to delay things). Writing up my report gave me cause to look back at my Loire 2015 at Three Years report, which featured (among many other wines) a handful of less familiar wines from Muscadet. In the midst of these new names was a most convincing wine from Michel Morilleau, and I was reminded that I had promised myself I would investigate further. So here we are.

Michel Morilleau is based near Legé, which as Muscadet experts will know places him well to the west of the better-known Muscadet Sèvre et Maine appellation, in Muscadet Côtes de Grandlieu. He and his domaine seem to fly under the radar; aside from the 2015 vintage, and a 2013 I tasted blind when participating in a Decanter panel tasting of long-lees-aged Muscadet a couple of years ago, I have never encountered any other bottles. It is noteworthy that none of the texts I have which appertain to the wines of this region, in both French and English languages, ever mentions this domaine. It is, as the locals might say, très confidentiel. 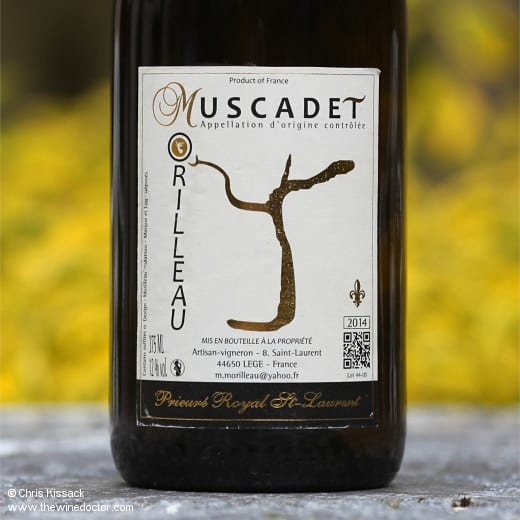 Despite this Michel Morilleau and his family have long had a presence in the region. Claiming a familial history in viticulture which can be traced back as far as 1740, he currently tends about 18 hectares of vines which are located around the Prieuré Royal Saint-Laurent. These vines are located on a south-facing slope, the soils underfoot serpentinite, the dominant form in this corner of the Muscadet vineyard, although there are also broad swathes of granite, orthogneiss and micaschist to the south and southwest. What is perhaps most striking about the vineyard is that these vines are alone, an island of Vitis vinifera in a sea of arable agriculture. There are a few parcels near the town of Rocheservière, a few miles to the northeast, but otherwise these are very isolated vines.

Michel has some parcels of Folle Blanche and Chardonnay, but of course it is Melon de Bourgogne that dominates in the vineyard. This latter variety is principally channelled into this cuvée, a straight Muscadet, Michel choosing to eschew the Muscadet Côtes de Grandlieu appellation. It also looks as though he has chosen to drop the sur lie moniker, although in fact its absence hints at the fact this is a long-lees-aged wine, and it was bottled long after the date for claiming the sur lie designation had passed (as an aside, many generalist wine writers claim that sur lie can’t be applied to the basic Muscadet appellation, only to Muscadet Sèvre et Maine and the like, but let me assure you they’re wrong). In the glass the 2014 Muscadet from Michel Morilleau has a pale straw hue, and the nose is rich in swarthy character, with notes of crystalline citrus pith, tangerine zest rubbed on flinty pebbles, with hints of white pepper and bitter smoke. The palate displays a supple texture at first, but there are some fascinating challenging elements, the midpalate flinty and pebbly, the feel a little like licking a dry, grainy stone. It maintains a fresh and bright character with a fresh acid backbone, some amaroidal citrus fruit, and a long, pithy substance. All in all this is a good wine, and I hope this isn’t the last I see of Michel Morilleau. 93/100 (11/5/20)