Continuing my recent explorations of less immediately familiar domaines in Muscadet, such as the recently featured wines from Vincent Pétard and Christophe Bazile at Pétard Bazile and Manuel Landron at Complemen’Terre, I come today to this wine, which combines quite effectively the classic gneiss-influenced Muscadet style with the richness of the 2015 vintage.

Les Grands Presbytères is located in St-Fiacre-sur-Maine, which is home to some of the region’s most iconic domaines, including Château du Coing de Saint-Fiacre and Chéreau-Carré. The cellars sit just to the northeast of the village of St-Fiacre-sur-Maine, just a stone’s throw from the waters of the Sèvre, and until recently they have been run by the third generation of the Marzelleau family, Nelly. The domaine’s story can be traced back to the 1920s, when Nelly’s paternal grandfather, a veteran of the Great War, was working in the region as a caviste, négociant and tonnelier, as well as running a cafe and tending to a few hectares of vines (he must have been busy). After his passing in 1956 his son inherited everything, but quickly decided to focus on the vines. By the time Nelly, the third generation, was just ten years old, she knew she would follow in her father’s footsteps as a vigneronne, or as she prefers, a viticultrice. 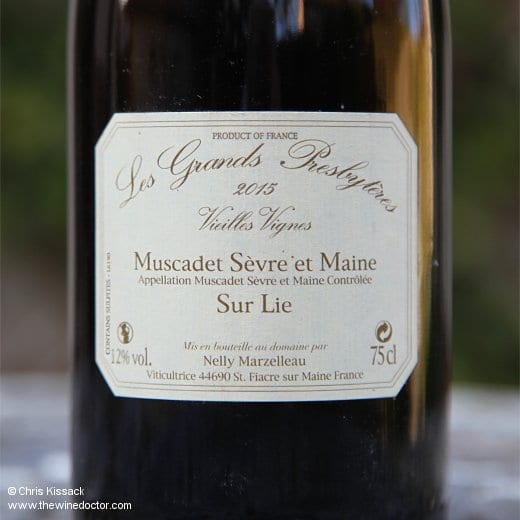 St-Fiacre-sur-Maine, close to the confluence of the Sèvre and the Maine, is a gneiss and orthogneiss hotspot. It is no surprise that most of this domaine’s vines are situated on these two classic Muscadet terroirs, which are covered here with a very thin layer of superficial, largely sandy and siliceous soils. The homogeneity of the terroir chez Marzelleau meant that the principal distinguishing factor between one parcel and the next has always been the age of the vines. The Vieilles Vignes cuvée, featured here, is well-recognised as one of the region’s top wines, expressing more depth and intensity than I would generally expect from these terroirs.

Time has moved on and in 2009 Nelly Marzelleau, who worked her first vintage in the mid-1980s, entered into an agreement with Christophe Gadais, of Gadais Père et Fils, to run the domaine on her behalf. Subsequent vintages, including the 2015 discussed here, have been made by Christophe. In the glass, the 2015 Muscadet Sèvre et Maine sur lie Vieilles Vignes from Les Grands Presbytères has a very fresh pale lemon-gold hue. The aromatics are a Muscadet-lover’s dream, kicking off with a very saline and mineral vein, wrapped around a central core of crunchy orchard fruits and some slightly citrus-pith suggestions. There is clearly good ripeness here, with a lovely fruit confidence. The palate shows great presence, vinous and textured, but cut with a variety of structural elements, including a fresh and vivacious seam of minerals bolstered by what feels like a very faint prickle of retained carbonic gas, even though this wine has been under cork for at least two years. The acidity is fresh and punchy, the fruit profile attractive, with lightly bitter peach skin and citrus pith, and it all focuses down into a rich, energetic but succulent finish, with some nice length to it as well. A very attractive style that does its best to transcend the richness of the vintage. 91/100

In 2016 the dynamic and young Pierre-Henri Gadais, Christophe’s son (and a descendent of Henri Bourgeois, as it happens) took over the running of this domaine from his father. It will be great to see how this domaine progresses as a new generation takes the helm. For more on this, see my profile of Domaine de la Combe. (7/5/18)