A rather recent discovery (for me, anyway), Domaine du Plessis Glain is located close to the banks of the Loire, near the very northern reaches of the Muscadet Sèvre et Maine appellation. It sits close to La Chapelle-Basse-Mer, a diminutive splash of vineyards sandwiched between the gardens and grillage of the suburbs, and the potatoes and polytunnels of the more intensive agricultural landscape that borders the river. The domaine has been in the Pétard family since 1840, handed down from one generation to the next for nearly two centuries.

Vincent Pétard joined his parents in their work back in 2004, and ten years later they retired. He has since teamed up with his old school friend Christophe Bazile in order to run the domaine, and they now market their wines under the name of Pétard Bazile. The two vignerons have 35 hectares of vines at their disposal, of which one half is planted to Melon de Bourgogne, the wines eligible for the Muscadet Sèvre et Maine appellation, while the other half is planted to a range of other familiar and not-so-familiar varieties, everything from Pinot Gris and Gamay to Chardonnay and Egiodola. The latter is a cross, developed back in the 1950s, between Abouriou and Tinta de Madeira, one I have encountered before not far from here, at Domaine de l’Ecu. 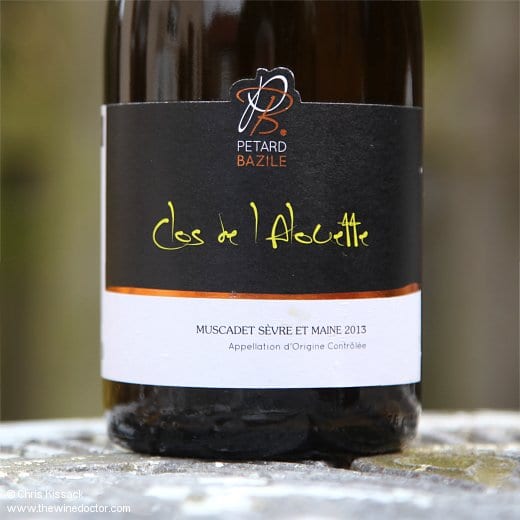 Coming back to Melon de Bourgogne, the fruit is picked partly by hand, partly by machine, and the vinifications are traditional, in subterranean cuves, with élevage on the lees. In the broad range of cuvées that results Clos de l’Alouette is one of the more significant. The clos in question extends over 5 hectares, with sandy soils over micaschist which have a tendency to ripen earlier than cooler terroirs. The Pétard family acquired the vines back in 1996.

The Pétard Bazile Muscadet Sèvre et Maine Clos de l’Alouette 2013 was vinified in a traditional manner as described, followed by a prolonged period of aging on the lees with bâtonnage, for 30 months, much longer than that permitted for the sur lie designation. Somewhat perversely, not for the first time, the absence of the sur lie suffix is a clue to the prolonged lees aging. Although I don’t have an exact bottling date the length of élevage implies it was bottled in spring 2016, so it has also had nearly two years of bottle age. The wine has a very pale straw hue which gives no hint to the wine’s richly polished style, which starts on the nose as a sweet salad of orchard fruits, apricots and dried apples, lifted with scents of bitter orange zest and elderflower, going way beyond the usual thyme and green pear scents of more entry-level wines. This is followed by a confident palate, both in terms of texture, which feels broad and seamlessly weighty, as well as its flavours, all framed with bitter citrus character. It has a succulent style, with fabulous acidity typical of the 2013 vintage, with a fine flourish of fruit in the finish. Overall, this is a long, sweetly concentrated and impressive wine, with a depth of texture and character that calls for fowl rather than fruits de mer. 93/100 (12/3/18)