It has been a full three weeks since my Weekend Wine took us all down to the vineyards of Muscadet, and I know some readers will already be suffering withdrawal symptoms. To salve the shakes and shivers, here is news of a wine from a recently established domaine located in the hamlet of La Brouardière, just outside Le Pallet. The young proprietors are mostly working with vines in the neighbouring commune of La Haye-Fouassière, and are turning out an interesting range of wines, working largely with Melon de Bourgogne of course, but they also have some Folle Blanche and Gamay. The young vignerons in question are Marion Pescheux and Manuel Landron, the latter the son of who else but the munificently mustachioed (if anyone would care to send me some ideas for other adjectives of excess beginning with ‘m’ I would be most appreciative) Jo Landron.

Manuel Landron might not have moved far, but first appearances would appear deceptive. The next generation in the Loire Valley are in general more widely travelled than their forebears, bringing a broader range of experiences and ideas to their travail in the cellars, and Manuel is no exception. Before settling here he first spent time in the cellars of New Zealand and in Chile, as well as getting useful hands-on experience with Xavier Weisskopf and Lise and Bertrand Jousset up in Montlouis, before returning to his Nantais roots. He and Marion settled here in December 2013, so the wine featured here comes from just their second vintage. 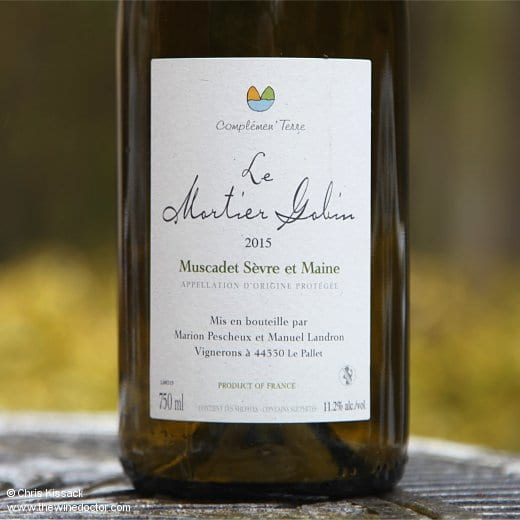 The Complémen’Terre vines are mostly planted on orthogneiss and are dominated by Melon de Bourgogne, which is spread across 8 hectares, while the other two varieties together account for less than 1.5 hectares. I probably don’t need to tell you who Manuel and Marion acquired their vines from, especially as the viticulture is certified organic, and organically managed vineyards are not easy to come by in these parts, not to mention the fact that until 2013 Jo Landron was working a huge 50-hectare domaine. It has shrunk a little since then – by about 8 hectares in fact.

For the region Complémen’Terre is a relatively small domaine, although perhaps that is best when you are young, and starting out as an independent, rather than slotting into the well-oiled machine of a larger family domaine. The fruit is picked entirely by hand with a strict system of triage. The juice is fermented by indigenous yeasts from berries and winery, and with no additions other then minimal sulphite treatments (up to a maximum 40 mg/l in the wine) it is perhaps no surprise that the wines also go through malolactic fermentation once the yeasts have finished their work. Much of the work is completed according to the lunar calendar, so Manuel and Marion certainly work with an awareness of their place in the universe, although they stop short of full biodynamics.

There are as many as nine cuvées produced here, of which Le Mortier Gobin is one of a trio of wines in the Muscadet Sèvre et Maine appellation (the remainder are mostly Vin de France). The terroir for this cuvée is a mix of orthogneiss and gneiss, the fruit picked and vinified as described above, followed by an élevage on the lees lasting up to 15 months. The resulting alcohol in 2015 was a very modest 11.2%, and this cuvée has a total sulphite concentration of 30 mg/l, restrained but far from zero. In the glass the 2015 Complémen’Terre Muscadet Sèvre et Maine Le Mortier Gobin has a fairly confident depth of colour for Muscadet, a pale golden hue, with the very faintest touch of onion skin. The nose is exotic, more so than I would normally expect with Melon, moving from the apple to the peach orchard, the sweet fruit fused with crystalline rose-petal perfume and notes of orange zest. The malolactic character is certainly showing here, and I have mixed feelings about it. It is intriguing, in a more exotic style than Jo Landron’s Melonix cuvée, but does it move too far beyond the boundaries of typicity? There is a very immediate acid tingle to the start of the palate, but this doesn’t translate into an appreciable backbone of acidity in the middle, which with all the lightly bitter and flowery orange blossom fruit character found here would have been appreciated. As a consequence it flattens out a little through the midpalate. Nevertheless I can’t deny that the rose, peach and passion fruit flavours I find here have charm, and they certainly hold my interest. A good wine, certainly one that promotes thought and conversation, although someone looking for a very typical Muscadet-Melon hit may be disappointed. Let’s hope it’s still enough to stave off those withdrawal symptoms. 90/100 (2/4/18)