Following the course of the Loire from its origin close to Mont Gerbier de Jonc down to the Atlantic Ocean takes us across a variety of terroirs. The river springs from the ancient rocks of the Massif Central, before flowing across the relatively youthful limestones of the Bassin Parisien, eventually reaching the ancient igneous and metamorphic rocks of the Massif Armoricain. This much I have already covered in my introduction to the geology of the Loire Valley; here, as I home in on the vineyards, grapes and wines of the Nantais, I focus more closely on the geology of this particular region.

Just as their modern equivalents do today, these ancient continents slowly rumbled their way across the surface of the earth on their tectonic plates, and as a consequence during the latter years of the Paleozoic Gondwana made contact with Euramerica. The two continents were joined as one, creating the ancient supercontinent of Pangaea. As they were forced one against the other the rocks of the Massif Armoricain were lifted upwards, creating the Hercynian range, a great chain of mountains akin to the modern-day Alps or Andes. In other words, if Nantes had been built during the Paleozoic it would have stood atop a mountain, and would perhaps have been better known as a ski resort than a port or wine region. But in the 300 million years that have since passed these mountains have been greatly weathered and eroded, leaving nothing more than a few low ridges and valleys. The highest point on the Massif Armoricain in current times is at Mont des Avaloirs, northwest of Le Mans, a low hill, the summit just 417 metres above sea level.

The very oldest surviving rocks are gabbro and granite, these being igneous in origin, and as I have indicated above these were laid down as long as 670 million years ago. Some of these rocks persist in their original form, while others have been transformed by the intense heat and pressure they have been subjected to during the many millions of years that have passed since they were created. These transformed rocks include gneiss, orthogneiss, schist, micaschist, amphibolite, serpentinite (pictured below, in situ on the Butte de Goulaine, among the vines belonging to Domaine Luneau-Papin) and a variety of other forms (more details of which I present further down the page). 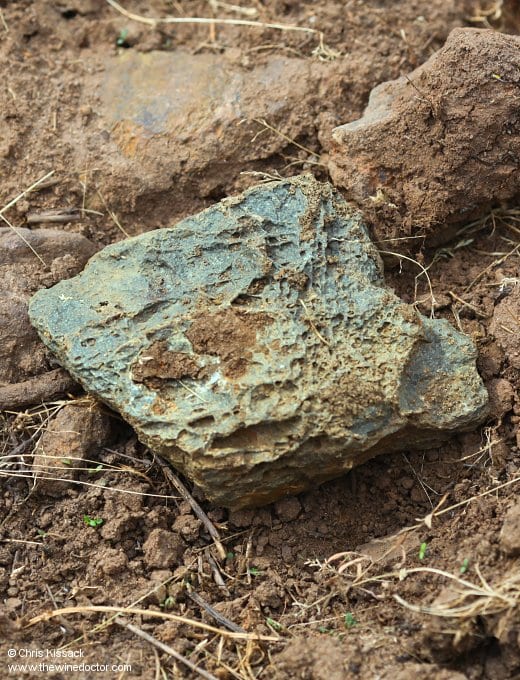 This picture can be further complicated by the presence of sedimentary rocks in very localised areas, in particular sandstone, or conglomerates such as puddingstone. Having said that, when I have encountered such rock types it has tended to be further east on the Massif Armoricain, and perhaps of more relevance to Anjou than to the Nantais. One rock you won’t find here is limestone (well, it is rare, anyway); this type dominates far to the east, where ancient seas laid down sedimentary rocks to cover these more ancient forms.