The road from Azay-le-Rideau down to Chinon runs laser-beam-straight through the countryside, a sharp-edged incision in ancient woodland, the remnants of a much more extensive forest which once covered much of the Loire Valley. This great forest was home to great numbers of deer, boar and a multitudinous variety of game birds (indeed it still is), offering superb hunting opportunities to French monarchs and noblemen. Perhaps the most grandiose evidence for this is Château de Chambord, built by François I (1494 – 1547) as the most grandiose of hunting lodges.

Today the trees of this forest still tower over the tarmac of the road, but the extent of the woodland is much less than it was five centuries ago. As you approach the north side of Chinon on the road through the forest they begin to thin. In a more romantic world they would yield only to rows of gnarly old vines tended by an equally gnarly old vigneron and his horse, but the reality is that they give way to a collection of low-lying semi-industrial buildings and a large retail park. And yet all is not lost. In the distance, on the left-hand side of the road, on a slope which faces the entrance to that retail park, there is a small and orderly parcel of vines. At the centre of it there sits a cylindrical building in a bright red hue; this is the modern face of Pierre & Bertrand Couly, a very young domaine created by family divisions within a very old one. 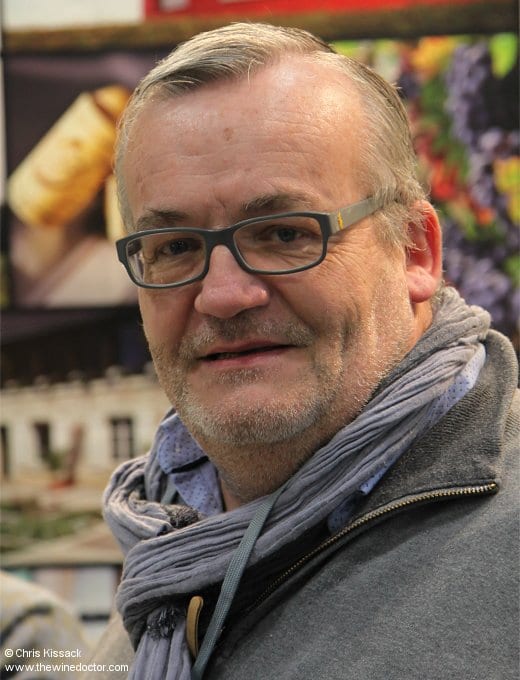 The story of this domaine begins after the turn of the century, when a rift developed within the famous Chinon domaine of Couly-Dutheil. I have already presented a very lengthy and detailed history of that domaine in the relevant profile, beginning with the origins of both the Couly and Dutheil families in Corrèze, through to modern times, and I do not think I need to reproduce it here. Suffice to say that the seeds of the division were sown with the arrival of the most recent generation. On one side was Pierre Couly and his son, Bertrand, while on the other was Pierre’s brother Jacques Couly and his son, Arnaud. Of the two cousins, Bertrand Couly (pictured above) was the older, and he joined the family business first, in 1986, having completed his wine studies in Montpellier followed by work in Pomerol, Oregon and Châteauneuf du Pape. Arnaud Couly joined the team much later, I suspect with a very different outlook. He came with a degree in business management rather than a wine qualification, but followed this up with time spent in California and on Long Island.