The car bounced just a little harder along the coarse tarmac of the single track road as I pressed the accelerator. I had not long passed Château Bernadotte, a minor estate situated in Fournas, in the Haut-Médoc vineyards west of the Pauillac appellation. Now I was headed south and east, back towards St Julien and – just a little, to be fair – it felt as though I was heading back to civilisation. Although there are a few vines around Fournas, I had quickly left such evidence of viticulture behind, and the narrow road was lined with dense pine woods on one side, and a tall thicket on the other.

Rounding a near-ninety-degree bend, the road began to climb slightly, and after passing a high wall on the left the landscape suddenly opened out. At first there was bare grassland, and then suddenly vines, the trees now seemingly pushed back by the now-dominant vineyard. And to the left, in the distance, a grand château appeared, albeit one partially obscured by trees. It was October, and harvest was just getting underway, and I could see the saisonniers scurrying around, ant-like both in their endless activity and their tiny, distant appearance. But what was this place? It was not long before I found out – the conveniently position road sign gave a bit of a clue. On this journey through the backwaters of Bordeaux I had chanced upon, on the very periphery of the Pauillac appellation, Château Lynch-Moussas.

This estate clearly has some link with the Lynch family, a notable local dynasty descended from an Irish soldier by the name of John Lynch. This particular Lynch was a descendent of Hugo de Lynch, a general who had landed on British soil with William the Conqueror in the 11th century. The Lynch family were installed in Ireland by the 12th century, and they lived there for several hundred years. This peaceful existence came to an end during the 17th century, however, as a consequence of the Williamite War between the Jacobites and the forces of the Protestant William III, Prince of Orange. The decisive battle in this war was the Battle of Aughrim in 1691, and following William III’s victory John Lynch – like many other catholic soldiers – fled for France. Many ended up in Bordeaux. 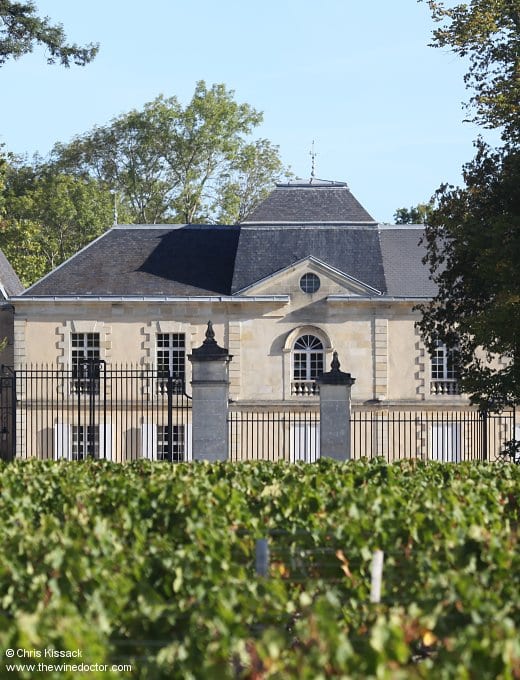 John seems to have adapted well to his new life, and he soon established himself as a trader of textiles, wool and leather in the bustling port of Bordeaux. He soon put down roots in his adopted country, marrying a local girl named Guillemette Constant in 1709, and together they had three children. There were two sons, Thomas-Michel and Jean-Arthur, and a daughter named Jeanne-Catherine. Of these, it was Thomas-Michel who seems to have been the most active in vinous circles. In 1740 Thomas-Michel Lynch married Elizabeth Drouillard, the daughter of Pierre Drouillard, a Treasurer of France and proprietor of a considerable Bordeaux estate. This included land he had purchased from Bernard Déjean, a merchant, in 1728. In 1749 two significant events occurred; first, Pierre died, and Thomas-Michel and Elizabeth inherited his estate. Second, they were blessed with a son, named Jean-Baptiste Lynch. He was one of many children; indeed, the total number of children that came from the marriage may have been as many as eight.