The story of Château Grand-Puy-Ducasse is naturally intertwined with that of Château Grand-Puy-Lacoste, the two estates both originating from one large domaine which existed during the Middle Ages. This estate incorporated the Grand Puy (puy being one of many words which refer to a hill or mound), the gravel mound which sits at the western edge of the Bages plateau; this is one of the many gravel croupes on which rest the great estates of the Médoc communes. Driving north towards Pauillac, on either the D2 or the D206, it is difficult to perceive the existence of this puy and plateau. Perhaps the best way to appreciate it is to come in from the west, from Artigues, along the Rue de la Grotte. Once you have passed beneath the railway bridge the road curves round and Château Grand-Puy-Lacoste comes into view, atop an imposing tidal wave of gravel, with more undulating gravel to your left, and the road begins to climb. Grand Puy, indeed.

The first identified proprietor of this grand estate, which also included some of the land currently part of Château Lynch-Bages, was a gentleman named Guiraud. It is tempting to think this man must also have had ownership of Château Guiraud in Sauternes, although it isn’t the case, that château having been named for Pierre Guiraut, who only acquired it in 1766. The Guiraud of Grand-Puy-Ducasse had two daughters, one of whom married a gentleman named Labégorce, the other a local Conseiller in the Bordeaux parliament named Déjean. The estate seems to have passed to the latter couple, as by 1728 the property was in the hands of a Bernard Déjean. It was at this time that Bernard sold off a section of the vineyard to Pierre Drouillard, these vines ultimately becoming the modern-day vineyard of Château Lynch-Bages. 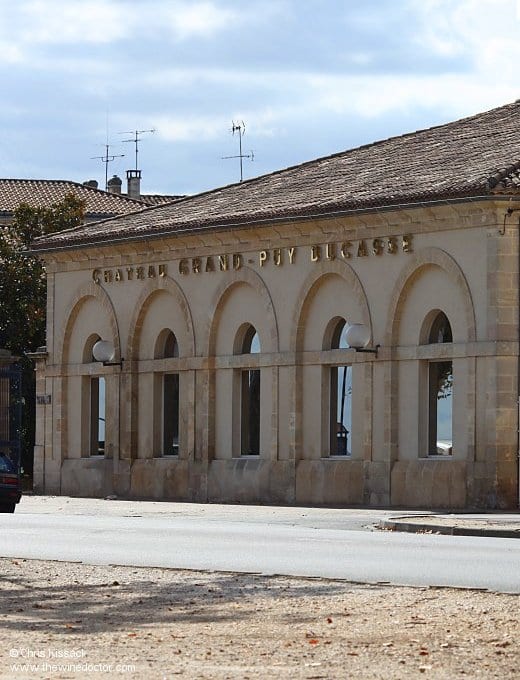 After Bernard’s death the estate – just 6 hectares of vines – passed to his widow Marie Capgras, although the late Bernard’s brother Bertrand Déjean also owned vines and it’s not clear if he also inherited some. Marie’s vines were then inherited by her own son, confusingly also called Bertrand Déjean. It was during this Bertrand’s tenure that Château Grand-Puy-Ducasse was born, when in 1750 he gave some of the vineyards on the Grand-Puy to Pierre Ducasse, one of his creditors. The new domaine was known at the time as Ducasse-Grand-Puy-Artigues-Arnaud, the modern-day name only appearing much later. What remained with the Déjean family, subsequently inherited by one of Bertrand’s daughters, was the origin of Château Grand-Puy-Lacoste.