It is remarkable what a difference a few metres can make when it comes to vineyards and the wine they produce. At the southern edge of the Pauillac appellation sits Château Latour, an estate which many – including myself – would regard as the appellation’s grandest. The château, dovecot and extensive winery buildings are surrounded by a gently undulating ocean of vines, old but strong, the waves of this vinous ocean carrying a spray of creamy white and pale-grey pebbles. The wines that come from these soils, these vines, is one of the most sought after in all Bordeaux.

And then, at the northern limit of the Latour vineyard lies the Route de la Rivière, a small road which runs down to the palus, the uncultivated pasture that borders the Gironde, before turning northwards and heading directly into Pauillac itself. On the other side of this lane is another vineyard with very similar soils, and the sign on the building on the other side of the vineyard, and the name on some nearby gateposts, identify the vineyard as that of Château Haut-Bages-Libéral. We have gone, in just a few paces, from celebrated first growth, to fifth growth underling. It hardly seems logical. But at the same time it is perhaps a promising situation; after all, what could be more appealing than an under-appreciated château nestled in the shadow of such a grand estate as Latour. Château Haut-Bages-Libéral and her wines clearly merit some exploration. 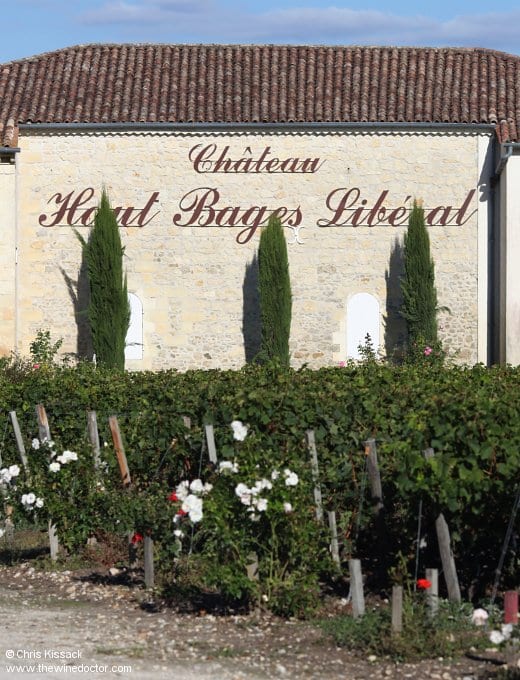 The early years of the property are rather unclear. What is certain is that the estate dates back to at least the 18th century, when it was in the possession of the Libéral family. Whether it was already a well defined estate when they acquired it, or whether they built it up in more piecemeal fashion, simply isn’t known. The Libérals were courtiers; these men oiled the wheels of Bordeaux business at this time (and still do today), their original role being to act as liaison between the négociants, who were holed up in their warehouses on the Quai des Chartrons in the centre of Bordeaux, and the proprietors, who resided some distance north in the ‘wilderness’ of the Médoc. For every deal a courtier brokered he would take a 2% cut, and in doing so many courtiers accrued considerable personal wealth. Perhaps this was what permitted the Libérals to purchase this land alongside Château Latour, and to gather around themselves a vineyard of some size. They must have worked hard on their new domaine, as by the mid-19th century the wine had developed a sufficiently strong track record for it to be ranked as a cinquième cru in the 1855 classification of the Médoc, a classification based purely on the trading prices of recent vintages.