Anyone with more than a passing interest in the wines of Bordeaux is aware that the en primeur system is intrinsically interwoven with controversy. One major thorn in the side of this system is the issue of blind tasting; during the primeur tastings, many wines can be tasted blind, but some – mainly the upper crust wines, first growths and similar – cannot be assessed in this manner because they won’t pour their wines anywhere else other than at the château. It is impossible to judge a wine in isolation from the label and its associations when you are surrounded by all the paraphernalia of Petrus, Latour or Haut-Brion. When you stand looking out over the vines of one of these famous name from the tasting room it is not so much ‘blind’ as ‘blindingly obvious’; you know exactly where you are and what you are tasting, and that of course may influence how you judge the wine.

All the first growths, including Château Lafite-Rothschild, behave in this manner. At Lafite there is a rather understated tasting room, where Charles Chevallier (who retired from this role in 2015) has always stood in attendance; here both first and second wines are lined up for tasting, as well as another wine, also owned by the Rothschilds, but frequently overlooked. This is Château Duhart-Milon. Indeed, it was during the primeur tastings one year that I made my first-ever visit to this estate; there was building work at Lafite, and as a consequence the tastings were moved to Château Duhart-Milon instead. This might sound like an exciting diversion, but bear in mind that Château Duhart-Milon is one of the few properties in the 1855 classification of Bordeaux to lack a true château. This was, in essence, a visit to a warehouse. An attractive warehouse, admittedly, but still a warehouse. 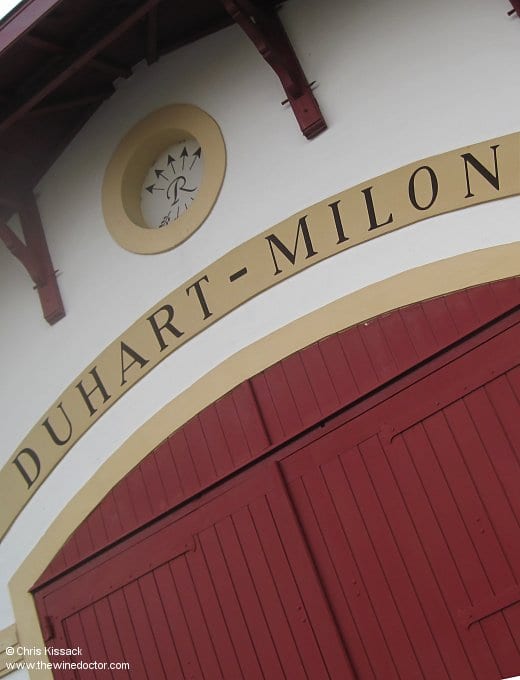 The warehouse in question is located off a side street in Pauillac. That this should be the sum of the Château Duhart-Milon facilities does not seem to have any detrimental effect on the quality of the wine, however, which is currently high and still climbing. This surely reflects the fact that in recent years the estate has benefited not only from a programme of revitalising investment following its acquisition by the Rothschilds – shortly before it perhaps disappeared altogether if its rapid rate of shrinkage was anything to judge by – but also the inherent expertise of the Rothschild winemaking team, led by the aforementioned Chevallier.