It is more than two decades since I made my first trip to the Loire Valley, drawn here principally by its wines, but also its glorious history. This is a region where the past seems very tangible in the present, from the dolmens and troglodytic caves of ancient times through to the valley’s many famous châteaux that sprang up during the Medieval and Renaissance periods, and I was eager to see some of these sights for myself. Of course I was also looking for a slice of la vie ligérienne, not just the wine but also rillettes and rillons from Tours, the region’s many famous goat’s cheeses such as the decapitated pyramid of Valençay and the little jewels of Chavignol, and I had heard good things about mushrooms and game from the valley’s forests. And, having something of a sweet tooth, I was occasionally partial to a little tarte tatin or pâté aux prunes, the former surely familiar to all, the latter perhaps less so, but both are strongly associated with the Loire Valley. I set out from my student digs in England full of energy and enthusiasm.

What followed was a ten-day voyage of discovery. I learnt a lot about the region and culture in which I had immersed myself, and I also learnt quite a lot about myself at the same time. It was nothing short of an adventure, one which I look back on today with fond memories. Reflecting on that first trip to the Loire, however, I see now how ill-informed I was. There were no comprehensive guides to the wines of the Loire available at that time, and all I had to go on was some very sparse information from writers who were obviously far too preoccupied with the glories of Bordeaux and Burgundy to be bothered exploring the Loire Valley. I started off in Angers, missing out on Muscadet altogether because I believed the ill-informed words of these wine writers, who stated with certainty that there was nothing of interest there. That was mistake number one. I overlooked Savennières as well as the sweet wines of the Layon, and also the Aubance (although to be fair I hadn’t even heard of either Savennières or the Coteaux de l’Aubance), because despite my aforementioned sweet tooth I was swayed by the opinions of these writers, who spoke out against sweet wines as unfashionable and sickly, and I thought therefore that only dry wines were worthy of my attention. That was mistake number two. I skipped Montlouis, really for the same reasons as those for Muscadet, and circumvented the sweeter wines of Vouvray, again seeking out only the dry. These were mistakes three and four. I have, of course, since righted all these wrongs, often many times over. I have done my time on the Loire Valley, and learnt things for myself, quite often the hard way. 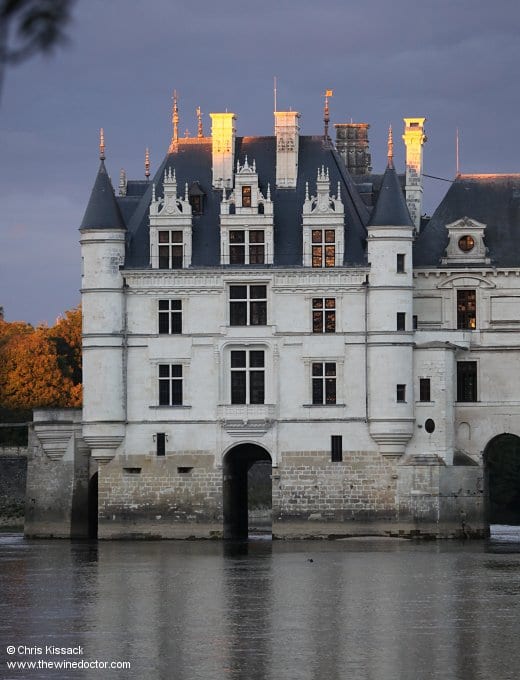 Happily, I did get some things right on that first trip. I visited Saumur, and discovered the wines of Domaine Filliatreau and Château de Villeneuve where Frederick Filliatreau, who had only just joined his father Paul in 1990, and Jean-Pierre Chevalier, who had taken up the reins in 1982, were both beginning to have a real impact on the wines of these domaines, and on the appellation as a whole. I spent several days around Bourgueil and Chinon, and tasted some excellent wines, and of course it was only a short drive to Château de Chenonceau (pictured above); to not see this château when visiting the Loire Valley would be a little like visiting Paris but not setting eyes on Gustave Eiffel’s most famous work. Some domaines that I visited have since drifted off my radar (I can’t recall the last time I saw a bottle from Clos de l’Abbaye, for example), but some remain very significant; even as a wine novice the quality within the 1989 Chinon Clos de l’Echo from Couly-Dutheil was patently apparent. And further upstream I went in search of the best examples of Sauvignon Blanc I could find. In Sancerre I chanced upon a number of domaines of note, with Domaine Vacheron being the leader of the pack. The memory of that encounter is faded and friable now, but the memory of the wines remains strong, perhaps because I have regularly refreshed this particular memory with an annual taste of the most recent vintage. Proof, surely, that wine is good for the brain.