The vineyards of the Coteaux d’Ancenis look out across the waters of the Loire, sandwiched between the town of Nantes to the west, and the vineyards of Anjou to the east. This is Muscadet Coteaux de la Loire territory, the two appellations being effectively laid one on top of the other, with only very minor differences in their boundaries.

That appellations should overlap or indeed directly overlie one another is nothing unusual of course; we have already seen that all the Muscadet sub-regions such as Muscadet Sèvre et Maine are superimposed on the much broader Muscadet appellation, in the same way that the grand and premier cru climats of Chablis sit within the generic appellation. Here, however, the situation is a little different, as the Muscadet Coteaux de la Loire and Coteaux d’Ancenis appellations are not distinguished by quality, or by ranking within an established cru hierarchy. What matters here is variety. A vigneron who chooses to plant Melon de Bourgogne in this particular corner of the Nantais vineyard will soon be vinifying a vat of Muscadet Coteaux de la Loire. A neighbour who prefers instead to plant Gamay, for example, will turn instead to the Coteaux d’Ancenis appellation.

As such, the Coteaux d’Ancenis is one of only three appellations in the Nantais vineyard which allows for varieties other than Melon de Bourgogne, the other two being Gros Plant du Pays Nantais and Fiefs Vendéens. Gros Plant (or Folle Blanche as it is increasingly known, for perhaps obvious reasons) is very much ‘in the zone’ for Muscadet drinkers, being a similarly styled acid-rich white wine, so the Coteaux d’Ancenis (and this is true of the Fiefs Vendéens as well) has an important role to play in providing some local varietal diversity.

Tending the vine has been part of life on the banks of the Loire for many centuries, here dating back to Roman times. Viticulture prospered with the support of the monasteries and abbeys that sprang up in the region during the Middle Ages, the wines finding ready markets in Ancenis and Nantes. The vine’s importance to the local economy was bolstered by the Dutch traders who arrived during the 16th century, the wines loaded aboard ships at the river port in Ancenis and exported via Nantes to thirsty northern nations. 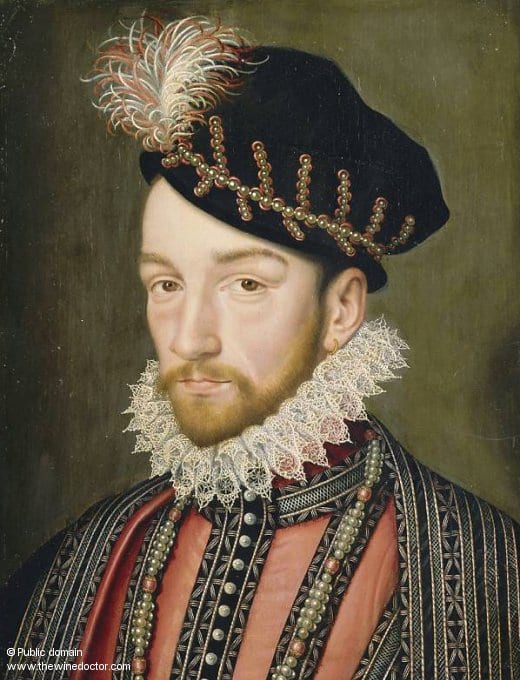 The 16th century was a time of great upheaval for the region, which was absorbed into France along with the rest of the Duchy of Brittany when Henry II of France (1519 – 1559) took the throne in 1547, as I have already described in my guide to Muscadet Coteaux de la Loire. Henry II died of septicaemia after a jousting injury and was succeeded by his son Francis II (1544 – 1560), who also died young, the throne then passing to his brother, Charles IX (1550 – 1574). Charles IX (pictured above, probably by the Renaissance painter François Clouet) is perhaps best known for having stood by while his mother, Catherine de Medici (1519 – 1589), ordered the massacre of the Huguenots in Paris on St Bartholomew’s Day in 1572. In Ancenis, however, he is instead remembered for having ordered in 1573 the construction of a business quarter in the town, where numerous wine brokers, shippers and merchants then established their offices. That four hundred years later Ancenis remains a wine town is a direct consequence of the patronage of Charles IX.