The Loire Valley has a long-established track record of sparkling wine production. The famous houses of Saumur, such as Langlois-Chateau and Bouvet-Ladubay, turn out an inordinate number of bottles every year, making this region the second biggest producer of sparkling wine in the world, after Champagne itself of course. These houses have focused on sparkling wine and often produce dozens of different cuvées, the few vins tranquilles they produce being something of an afterthought. Elsewhere along the banks of the Loire, however, sparkling wine is not so predominant. It is easy to find of course, especially around Vouvray, but here – as the case with Crémant de Loire and other sparkling appellations – the best wines tend to form just one small part of a portfolio, as we might find with Vincent Carême or François Chidaine, for example. It is in fact quite rare to find a quality-orientated estate focusing exclusively or mainly on sparkling wine outside of the famous houses of Saumur. Nevertheless, Château d’Aulée – located very close to Azay-le-Rideau, in Touraine – is one such domaine.

The domaine was established in the mid-19th century by the Cordier family, Bordeaux négociants perhaps best associated in more recent times with Château Talbot and Château Gruaud-Larose. It was they that constructed the château here, in 1856, which perhaps explains its rather formal appearance (pictured below); it would not look out of place if it were picked up and transplanted to a Bordeaux commune on the edge of the Gironde, especially Pauillac or St Julien. The Loire Valley is not short of such châteaux of course, there being many around Nantes – the so-called Folies Nantaises – which, like those in Bordeaux were built off the back of the trade passing through the local port. You can find many similar properties dotted along the banks of the Layon, often with a distinctive Anjou style. Up here in Touraine, however, such residences seem less common. The Cordier family must have enjoyed having tenure over the property, as they ran the estate for many decades, not giving up until it was sold in 1973. 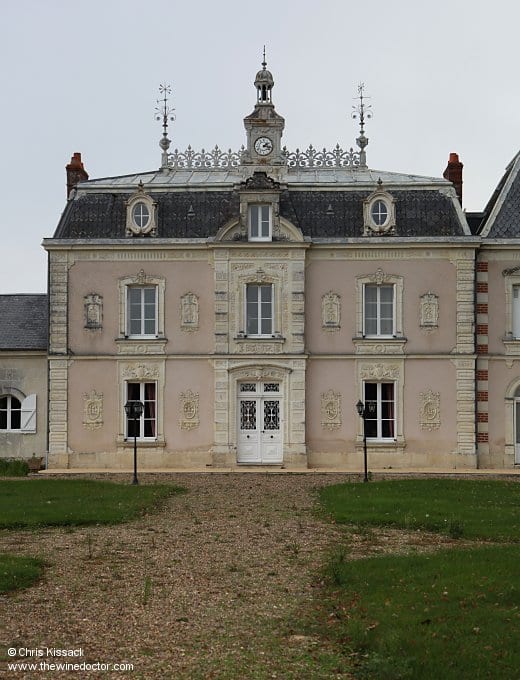 The new owner was Madame Lallier-Deutz, of the same family that owned the Champagne house Deutz & Geldermann, better known today simply as Deutz. From that moment on Lallier-Deutz orientated the vineyards and portfolio of wines towards sparkling styles in preference to the Touraine Azay-le-Rideau appellation. By the time her tenure came to an end in 2002 the domaine had a well-established association with the production of vins mousseux. Lallier-Deutz had invested in the vineyards, installing field drains, and she had replanted extensively; at the point of sale the estate could boast 37 hectares of vines, entirely white, mostly Chenin Blanc although also with a little Chardonnay.