I really can’t abide hanging around waiting for things to happen. Time spent kicking my heels is time lost, and this is especially true when visiting a wine region, the Loire, Bordeaux or otherwise. I don’t fly over to Bordeaux so I can spend half the morning in bed, and so days on which the first appointment is not scheduled until 10am, or even later, feel to me like days half-wasted. And so I was delighted to be here at Château Talbot at 9am – bright and early in most people’s books, and good enough in mine – for my first tasting appointment of the day on this trip to Bordeaux in late 2011. I brought my hire car to a halt at the gates, which were securely locked by an electromagnetic mechanism, and pressed the intercom button for the bureau. A minute or so later, with no response, I tried again. Then I tried the button for the régisseur…..again, no response. Hmmm….this was strange. Perhaps they were all still in bed?

Step one was to try at the other gate, visible on the far side of the estate; and again, here I thumbed the buttons first for bureau and then the régisseur. Again….no answer. Step two was to try at the end of the château, where building work – no doubt representing the reinvestment of profits made with the sale of the 2009 and 2010 vintages – meant a temporary side entrance had appeared. Unfortunately it was not for breaching, and so I continued on. After skirting the perimeter of the estate I found a gate around the very back of the property that was slightly ajar. Easing my way in, I found myself in a courtyard at the very back of the château. I shouted a greeting (in my best pidgin French, naturally), but as you might have anticipated by this point in my story there was again no response; it seemed as though the château was completely deserted, even though I could see ahead that the doors at the back of the château looked to have been left open, completely unsecured. 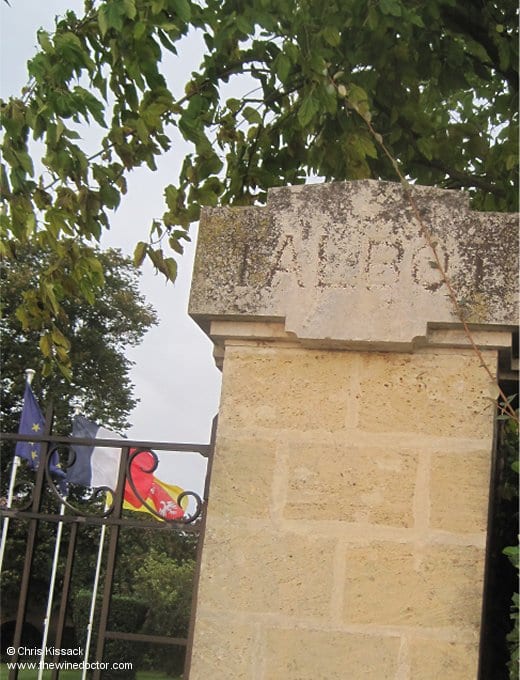 I briefly considered backing my car up to the gate, and making off with some of the valuable antique furniture from within, before several rational arguments against such a scheme brought me to my senses. First, the intelligent thief would make off with the most valuable items to hand, and these days that is more likely to be a few bottles of the 2009 vintage than a dusty old chair. I would be pilfering the wrong ‘valuables’. Secondly, I was flying back with hand luggage only, and there was no way was going to be able to squeeze a Queen Anne dresser into my carry-on bag. Thirdly, and this was the clincher, I suddenly remembered I have left my gloves (Winedoctor never leaves so much as a fingerprint, you know) and balaclava at home. Realising I was hopelessly ill-prepared, and having failed to raise any response with my calls, I turned around and crept stealthily from the courtyard.