Anybody who has read about the vineyards of St Emilion will probably have learned something of this wine region’s ancient Gallo-Roman heritage. There was Ausonius of course, for whom Château Ausone is purportedly named, although I am not certain I have been convinced that this is anything more than myth or legend. There is more tangible evidence of Gallo-Roman occupation though. Indeed, the area around Château La Gaffelière, Château Saint Georges Côte Pavie and Château Moulin Saint-Georges seems to be littered with ancient artefacts, largely dating to the 3rd and 4th centuries. Clues as to why this should be came to light at various points during the 20th century, and we have Léo de Malet Roquefort of Château La Gaffelière to thank for one such discovery, made in the late 1960s.

It was February 1969, and Léo de Malet Roquefort was out surveying his vineyard, intent on planting up a small parcel which at that time lay fallow. As he dug into the soil, however, he had hardly begun when he unearthed brightly coloured tesserae mosaics. Remarkably, it appears Léo was not completely surprised by this discovery. He was already aware of the writings of Charles Ouÿ-Vernazobres (born 1868), a cavalry officer who had settled in the Maison du Palat on the road leading up to St Emilion and who penned numerous works on the ancient history of this town. Thus the notion that St Emilion had been inhabited since the ancient Roman times was not a new one to locals such as Léo. 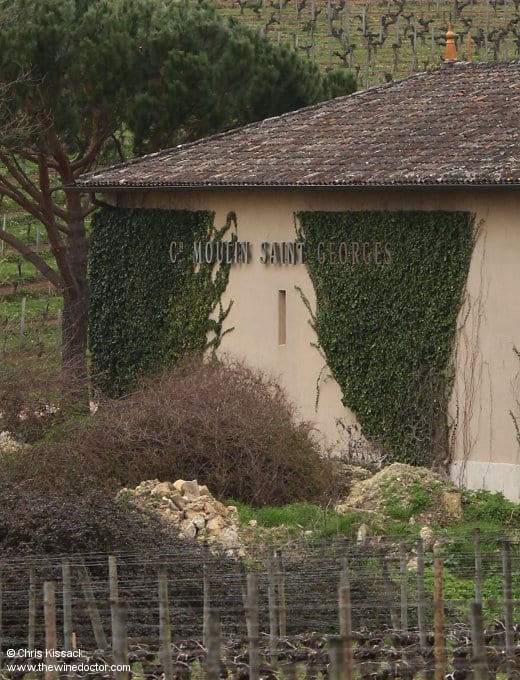 What did come as a surprise, perhaps, was the extent of the Roman villa Léo had discovered (although the name of the Maison du Palat might give something of a clue, as I will explain in a moment). Léo informed the director of the Antiquités Historiques d’Aquitaine of his discovery, and an archaeological excavation began later in 1969, with further investigations in 1970, 1971, and then throughout the 1980s. What was uncovered during these excavations was the southern facade of a huge residence, with many tesserae mosaics (much more extensive than the one displayed at Château La Gaffelière, detail from which is pictured on the next page), with many depicting vineyard scenes. This facade included a broad colonnaded gallery of monumental proportions, being more than 90 metres long, looking out onto a large garden with a sunken pool, itself 60 metres long. Within there was a ceremonial hall, surrounded by smaller rooms. This was more a palace than a villa, which perhaps explains the naming of the Maison du Palat (palat coming from palatium, Latin for palace).