At the foot of the slope behind Château Cantin, on the very edge of the St Emilion appellation, there lies a sizeable pond, one which gives rise to a stream. This little stream flows directly north away from the château and, if truth be told, there is not much to it; it is in fact little more than a drainage ditch, one you can easily hop over, that runs down through the woods and between the vineyards into another pond, which in turn empties into the Barbanne. Nevertheless, this little stream is known as the Cantin, and I did wonder whether or not it might be that the château took its name from this watercourse. It is such a diminutive ditch, however, that it is perhaps more likely that the names have a shared origin, or perhaps even the stream is named for the château. Indeed, an examination of the history of the estate reveals another likely origin for the name; it seems plausible that cantin is a derivative of cantio, the Latin for song.

It seems accepted that there have been vines planted here since the Middle Ages, although exactly when they first appeared and who might have planted them seems to have been long forgotten. Nevertheless, a well in the middle of the vineyard dates to this time, providing evidence that someone was working the land even then. It is only in the 17th century that the history of this estate becomes more certain; most of the buildings that still stand today date to this period, when the property served as a Benedictine monastery, the monks farming the surrounding slopes, tending the vines and no doubt other crops too. That this was so explains a number of features, not only the name – most probably derived from the Gregorian chants or cantio that these monks must surely have sung during worship – but also the layout of the buildings, which encircle a central courtyard, a square tower in the corner the most prominent feature. Only the addition of cloisters, which this farm-come-monastery clearly did not merit, could make it feel more monastic. There is also a small chapel which still stands on the estate.

The monastic era, evidence of which can still be seen at the château today (below), came to an end during the Revolution at the end of the 18th century, when like most property previously in the hands of the church or nobility the buildings and land were confiscated and then sold off as a bien national. At this time the property was apparently purchased by Baron de Mauvezin, and it is said that his family held onto the estate for about a century. In the 1868 edition of every Bordeaux-lovers bible Cocks et Féret, however, the property is noted to be in the possession of one Monsieur Itey; presumably he is a descendent of the Baron in question. As we would expect the estate having been in ecclesiastical hands for many centuries, the vineyards are certainly well established by this time, the annual production amounting to 50 to 70 tonneaux. 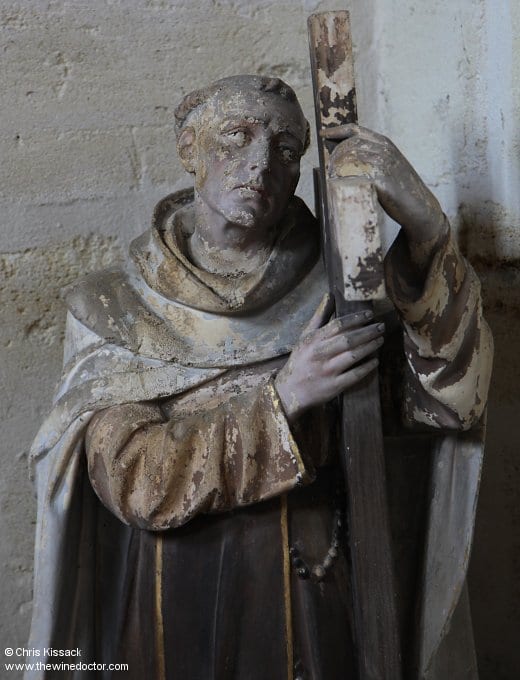 In subsequent editions little seems to change at the estate, although the property was clearly gaining recognition as in the 1874 edition the château is listed as a deuxième cru of St Emilion. Production remained about the same, 70 tonneaux in 1883, and it was still Itey at the helm. The first change of note came before 1890, by which time it had been acquired by Alphonse Bisch, a Parisian wine merchant. Presumably this is the end of the century-or-so that the property spent in the hands of the Mauvezin family. Bisch apparently did much to restore and reconstitute the property between 1890 and 1900.