The sun was setting on the last years of the 1970s when, in a small corner of Pomerol, a young Jacques Thienpont began to harvest his first grapes. He was the latest generation of the family to come down from their native Belgium to work in the Bordeaux wine trade, an arrangement that had been in place for several generations. The family’s négociant business had been founded by Kamiel Thienpont (1819 – 1896) in 1842, and since that time many members of the family have made the trek down to this little corner of France. It was not until the early 20th century, however, that Georges Thienpont (1883 – 1962) began to put down roots, buying Château Troplong-Mondot in St Emilion in 1921, and then Vieux Château Certan in 1924. 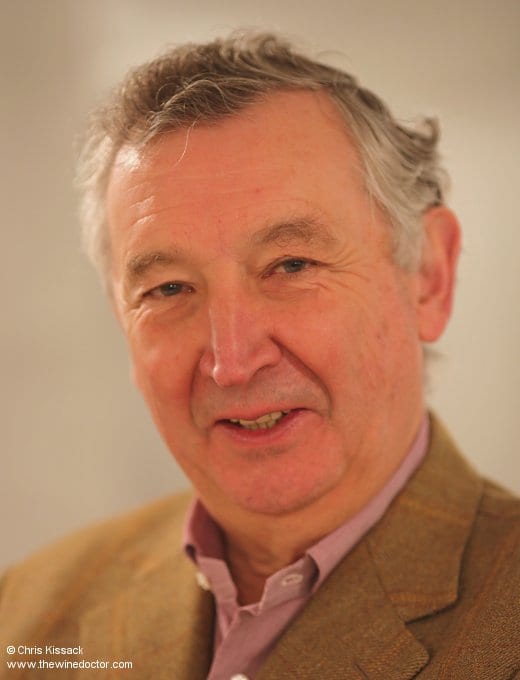 The story of Georges and his many sons, the Bordeaux-branch of the Thienpont family, has already been well documented on these pages, not least in my profile of Le Pin. It was in this vineyard that the aforementioned Jacques Thienpont (pictured above), began his first harvest in 1979. What was Jacques thinking to himself when he watched the first grapes roll in, I wonder? Was he happy simply to have a vineyard of his own, his own little kingdom, albeit a rather expensive one? The family had paid 1 million francs for it, a very high price at the time, although it would be considered peanuts today. Or was he looking to the future, planning to build a brand that would challenge Petrus for supremacy within the appellation? Having met Jacques several times, I am tempted to think the former. At heart he is a winemaker, who believes wine is to be drunk, and I do not think he foresaw or planned the rise to greatness that Le Pin has enjoyed. Indeed, I don’t think anybody could have foreseen or planned for such a thing.

From Pomerol to St Emilion

It should perhaps come as no surprise then that Jacques, assured in his success at Le Pin, should look around for a new challenge. It may have been that he would have liked to expand his little vineyard in Pomerol, and indeed he has purchased a few rows of vines over the years. But suitable plots are hard to come by, not every parcel he purchases makes the grade anyway (especially parcels acquired on a “well, if you want that vineyard, you have to buy this one too” basis). And of course these days, this is even more expensive than it was back in the 1970s; land now changes hands at a much greater price than the ‘mere’ million francs he once paid. There is an obvious solution of course; look elsewhere in Bordeaux, where parcels of land come up for sale more often than once in a blue moon, and when they do the price tag is less eye-watering. Normally on the right bank this means Castillon, or one of the satellite appellations. To Jacques, it meant St Emilion.

It was in 2010 that Jacques Thienpont decided to look beyond the borders of Pomerol for a new vineyard venture, and it was not long before he came across Château Le Haut-Plantey, a small property for sale on the plateau of St Emilion, in the Mondot secteur. Having looked through older editions of Cocks et Féret back as far as the first edition, in 1850, I can find no trace of this estate, or indeed of Château La Bouygue as it was also once known. What I have discovered, however, is that the property enjoys an enviable location, sitting just beneath the gardens of Château Troplong-Mondot, a short distance down the road from Château Bellisle-Mondotte. Jacques clearly thought the position to be good as a deal was done, and he soon found himself the proprietor of a vineyard of a decent size, complete with a few tired-looking but perfectly functional buildings. He named the new estate L’If, if being French for yew (there’s a tree theme here, as pin is French for pine), although I don’t believe there is a yew tree on the domaine (perhaps one will arrive soon). That was the easy part though. He had a lot of work on his hands if the estate was to produce something of the level of quality Jacques was hoping for. (6/8/15, updated 11/12/16)