Located on the slopes west of St Emilion, Château Daugay is one of a small number of properties that takes its name from the lieu-dit of Daugay, itself a derivation of daou gay, a local name for the jays that used to gather among the trees on these slopes. Although, if you read my profile of Château Quintus, previously known as Château Tertre-Daugay of course, you will discover an alternative theory that daugay is derived from an old Gascon word for a look-out post. I suspect we should perhaps take both explanations with an appropriately large pinch of salt.

Unlike its neighbour Château Quintus, the position of Château Daugay on the slopes is far from prominent, and I confess I have driven close by many times without giving it so much as a glance. It was not until I was presented with a bottle to taste quite recently, during a visit to Château Angélus, that I was reminded of this estate’s existence. Long a possession of the extended Grénie–Boüard de Laforest family, its appearance at Château Angélus was a marker of the property coming more firmly into the family fold, which suggested to me that there were changes and improvements afoot. And that it was probably time to look at this St Emilion estate more closely.

The land at Daugay originally belonged to the noble de Sèze family, about whom I have already written in my profile of Château Berliquet; the two properties are of course very close to one another, and the Berliquet and de Sèze families were joined by marriage. They also had numerous links with the equally notable Chaperon family, and it was during the early-19th century that the forerunner of the modern-day Château Daugay was carved out as in independent domaine by Paul Romain Chaperon (born 1777). It was most probably Paul who was responsible for building the château here in 1816. He had married Magdelaine Duplatier Bauduc (1784 – 1834) on April 15th 1807, and they had two sons and a daughter, and of his children it seems certain that it was Paul Romain Joseph Chaperon (born 1814) who inherited his vineyard. It was he who was listed as proprietor of Château Daugay in the 1850 Cocks et Féret, when he was turning out 18 tonneaux per annum. Nearby, there was a Pierre-Philippe Alezais, tending to vines at Dougay rather than Daugay, these vines most probably the forerunner of the Château Tertre-Daugay mentioned above, which became Château Quintus. 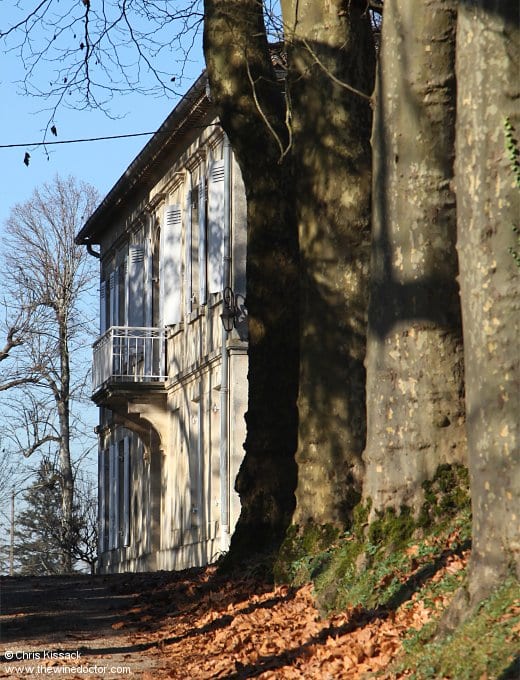 On October 11th 1846 Paul Chaperon (the son not the father) had married Marie Eliza Bourricaud (born 1829), and although it was not noted in the 1850 edition this was recognised in the 1868 Cocks et Féret, in which the presence of the Bourricaud and Chaperon families here was noted. Marie’s father was Jean Bourricaud, a négociant, so the family may well have played an active role in the running of the vineyard. By 1868 the two sides of the family, Paul Romain Joseph Chaperon on one side and Mrs Bourricaud, as she is referred to, on the other, were still cited as proprietors, although it is noteworthy that production had dropped from an impressive 18 tonneaux (the equivalent of 72 modern-day barriques) to between 10 and 12 tonneaux per annum. This was almost certainly because they sold some of the vineyard, as there was now a third proprietor (alongside the Alezais and Chaperon families) also listed. This was one Henri Greloud.