Château du Cléray, the wines of which have cropped up on these pages once or twice before, is a rather imposing property which sits atop a gentle slope not far from Vallet, in the north-eastern corner of the Muscadet Sèvre et Maine appellation. Its rather solid and foursquare appearance might suggest the builders were more interested in size and function rather than elegance, but this square-fronted style is one which seems to typify the châteaux of the Nantais and some parts of Anjou. It has for many years been the home of the Sauvion family, a significant name in Muscadet, having been acquired by Ernest Sauvion in 1935.

During the mid-20th century the Sauvions, led principally by Jean-Ernest, were renowned for the dynamic nature of their business. Alongside the wines of their own extensive vineyard they also operated as négociants, buying in wines from a number of local Muscadet growers, as well as from appellations up and down the Loire Valley. It was the way they did business locally that won plaudits; with no regular contracts, they would buy only from growers who met the required quality level, often acknowledging the vigneron on the label, a little like some sherry bodegas credit their almacenistas (well, sort of). With in-house tastings and cash rewards for the winning wines, it was no wonder they had little problem sourcing the best quality. 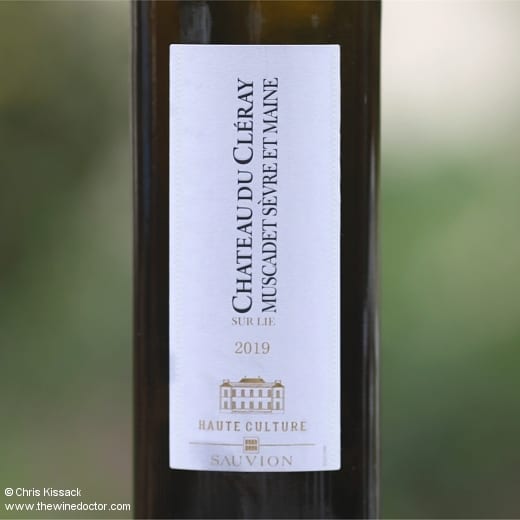 The business today, however, is very different. Jean-Ernest handed the reins to one of several interested nephews, Pierre-Jean Sauvion, and subsequent to this the entire Maison Sauvion business – not only the négociant side, but the family property as well – was sold to Grands Chais de France. Pierre-Jean stayed on, and runs a tight ship. The local négociant business seems to have been reined in, there being just a handful of Muscadet cuvées made here now, of which the most interesting is that from Château du Cléray itself. I don’t find the négociant wines of any great interest, although the varietal Fildefer wines, with their swing-top closures, can be good fun.

It was interesting to come back to the 2019 Château du Cléray Muscadet Sèvre et Maine sur lie this weekend, having tasted it as a barrel sample back in early 2020. It comes from soils of silty-sandy clay sat over a deeper bed of micaschist. Picked by machine, there follows a little skin contact before pressing, settling and vinification. The latter takes place in stainless steel cuves, after which it rests on the lees for six months, with bâtonnage, prior to bottling. In the glass the 2019 has a clear and limpid hue, and a charming nose of scented apricots and orange peel, lifted with notes of honeysuckle and a touch of oyster shell. There is a plush start to the palate, with all the charming fruit seen on the nose coming through here, set within a softly textured core. For interest there is just a touch of skin bitterness, and a hint of pithy bite, but it is that soft citrus character that dominates. The acidity also feels rather gentle, rather more so than it did when I tasted a sample prior to bottling. Plenty of charm here though, but not the structure or drive it would need for the cellar. Drink over the next two or three years. 91/100 (12/7/21)