There is no château in St Julien more majestic than Château Ducru-Beaucaillou; the original building was probably impressive enough when it was erected, but the addition of two imposing towers which flank this central portion sets it apart from most of its peers. These towers were added during the latter part of the 19th century by the famous Bordeaux négociant Nathaniel Johnston to honour his new wife Marie Caradja de Constantinople, the daughter of Prince Constantin of Turkey. Being a princess she was perhaps used to living in a palace, so perhaps it was only natural (or perhaps expected!) that Nathaniel should undertake such a grand embellishment of his château.

The rather circuitous drive through the estate’s vineyards down to the cellars where Bruno Borie and the rest of the team at Château Ducru-Beaucaillou host their annual primeurs tastings always facilitates an excellent view of his elevated edifice. Of course the prologue to this year’s tasting was a little different. There was less of the sunny (well, sometimes the primeurs can be sunny) drive though the vineyard, and none of the fabulous views of the château. It was more about clearing the kitchen table (now renamed the tasting table, for the course of a few weeks at least), hooking the laptop up to the internet and signing in to my first videoconference of the 2019 primeurs. And don’t forget grabbing the bottles, and some glasses. And a spittoon. And some paper napkins, and a dump bucket. Maybe I should pull the corks? Oh, hang on, there goes the doorbell with the next delivery of samples.

There is a lot less work involved in dashing up and down the Médoc from one appointment to the next to taste the latest vintage than there is in tasting it at home. Give me a trip to Bordeaux over this any day! 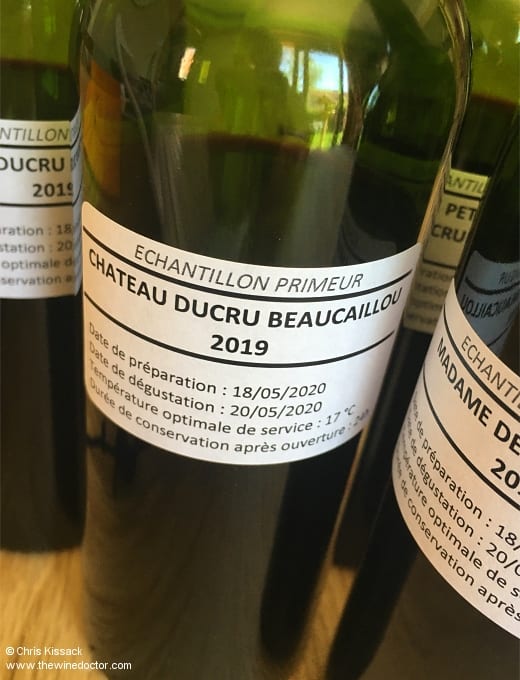 Bruno Borie popped up on the screen accompanied by Cécile Dupuis, his new head of research and development, who I previously met when she was working as technical director with Jean-Baptiste Audy at Clos du Clocher. Our introductions done, Bruno launched into his view of the vintage and its wines. “We had two brief periods of heat in July, but it was not sufficiently hot to make any imprint on the style of the wine. Then in August and September we had beautiful weather, but no more heat-waves. At the end, there was no problem with the Merlots, they were ripe. The Cabernets took a little longer to reach full maturity, and this was helped by a few days of rain as the end of September neared. The rain put the vines back to work, giving freshness to the leaves. Thereafter the skies were blue, it was warm but not too warm. The conditions at the end were ideal for the maturity of the Cabernet Sauvignon”.