After a faltering start to my 2019 Bordeaux reports, which began last week with my introduction to the vintage and my 2019 St Estèphe report, this week I pick up the pace. And although during the course of these regional reports we will hop around from the left bank to the right bank and back again (maybe several times, my apologies if it makes you feel dizzy), I continue today in a fairly logical pattern, heading south from St Estèphe to Pauillac.

Here we come to one of the great left-bank appellations, one blessed with the desirable gravel terroirs of the Médoc, and home to three premier grand cru classé estates. As I am sure readers are already aware, one of that famous trio, Château Latour, called a halt to the sale of their wines en primeur back in 2012. Despite that I continued to visit during my annual primeurs trip to Bordeaux because a taste of Latour’s three wines contributed to my overall understanding of the vintage, and this early encounter also gave me a starting point prior to revisiting the wines when they are eventually released. In view of this approach to the en primeur system, however, I did not expect Château Latour to send out tasting samples, and on enquiring (the saying “God loves a trier” might be appropriate here) my suspicions were proved correct. As a consequence, there are no notes or scores from this estate in this report.

As for the other two first growth estates, they responded to the cancellation of the primeurs in very different fashions. 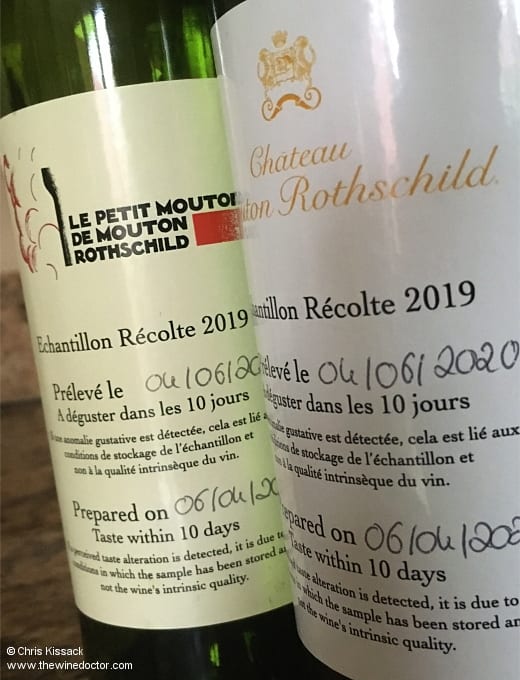 Speaking to Philippe Dhalluin at Château Mouton-Rothschild, who sent samples to me in Scotland, it seemed to me he was content with how the growing season had progressed, and with the quality of his wines. “June was initially wet, then drier at the end of the month, and the same for July, with temperatures up to 40ºC. At Mouton we have pebbly soil which does not hold water well, so I was happy when we had a storm with 30 mm of rain in July. Both July and August were warmer than average, and so again in August I was happy to see some rain. We had 50 mm just at the time of véraison, a perfect amount, just enough, not too much”.