The many châteaux of Sauternes and Barsac (not to mention Cérons, Sainte-Croix-du-Mont and all the other overlooked sweet wine appellations of Bordeaux) require a very different set of conditions to make the best wine possible, and so in this instalment of my 2019 Bordeaux primeurs report I will wind things back a little to look at the growing season and harvest once again, this time paying particular attention to how conditions impacted upon the maturity of the fruit and the development of botrytis in this corner of Bordeaux.

Early on the season was pretty much as described in my 2019 Bordeaux Weather Report, with a mild winter and an early budbreak. There was not too much trouble with frost, and before long the vines were in flower, with good fruit set. There was a little coulure, as there was elsewhere in Bordeaux, but like their counterparts across the region the loss was not significant. Good conditions through June and July brought the vines along very quickly, and in early summer all was looking good. 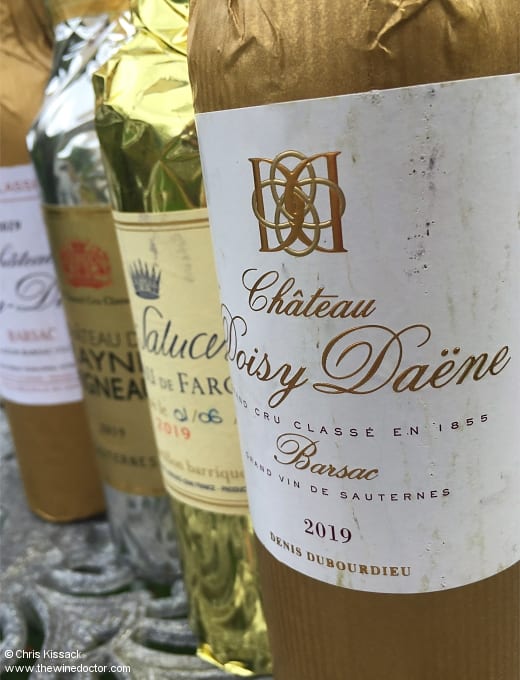 It was in July that the story in Sauternes and Barsac deviated from the rest of Bordeaux. Whereas other regions enjoyed ongoing warm and largely dry weather with occasional showers, in Sauternes the rain was heavier. As I have already mentioned in my weather report, whereas Pauillac had just 41 mm of rain in the entire month, Sauternes had 100 mm. Combined with the very warm weather this prompted a significant attack of acid rot, unusually early in the season. This could have ruined the vintage, but fortunately the dry conditions throughout August and September gave the various châteaux time to respond, and to clean up the vineyards. It was a significant undertaking, but necessary to save the harvest. Not everybody succeeded though; there is no wine from Château Nairac this year, the crop entirely lost at this time. And everywhere else, what had initially looked like a generous crop was now, after the necessary nettoyage, looking rather more meagre.