I finish up the four big left-bank appellations with a vicarious trip to Margaux, partly by the magic of videoconference call, and partly through the delivery of a host of tasting samples to my address in Scotland. Early on in my tastings I was delighted to check in with Philippe Bascaules at Château Margaux who gave me a run-down of the Margaux experience in 2019.

“We started with a normal spring, with nice temperatures. It was a little wet, with a little more rain through to mid-June, but the flowering and fruit set was good. Then from June 21st until September 21st we had three months of fine summer weather, with just 64 mm of rain during this period. The temperature in July was 39.9ºC, the highest I have ever seen at Margaux. August was less warm than July, September was warm, conditions that were very good for old vines that could take the water stress, but the younger vines suffered as they did in 2018. Then at the end of September we had 30 mm of rain which completely changed the composition of the grapes and thus the style of the vintage”.

Philippe is not the first to note high temperatures in July, but these have had no impact on the style of the wines, as pre-véraison temperature spikes do not have an effect on flavour and structure. And the temperatures during August and September, after véraison, were not excessive. He was also not the only one to see two different styles of fruit in the harvest this year, depending on how the picking related to the rains. He started the Merlots on September 18th, before the rains, and the Cabernet Sauvignon on October 1st, after the rains. 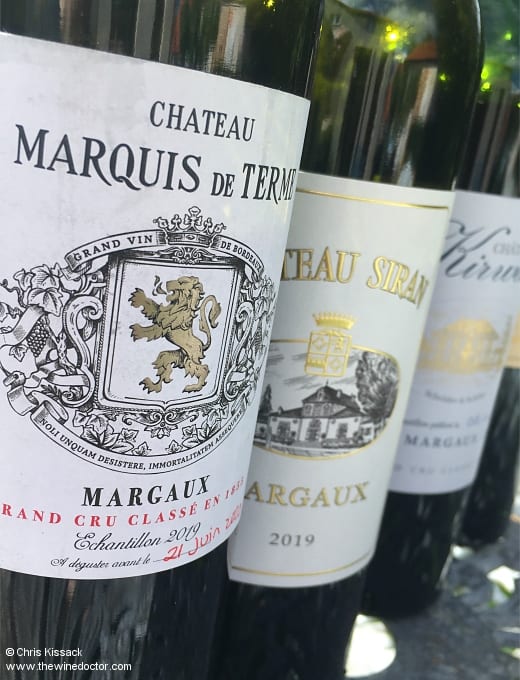 “I see 2019 as the combination of two vintages, one picked before the rain, and one after. Before the rain the fruit was very similar in style to 2018, while after the rain it felt very different, and more difficult to compare with preceding vintages. The Merlots which came in before the rain were concentrated, high in alcohol and in tannin, opulent and impressive. The Cabernet Sauvignons which came in afterwards were much more in balance, the rain helping the freshness and the acidity. We had to pay attention to the extraction with both varieties – it would have been very easy to make a very big wine”.