We come now to the top wines of St Emilion in the 2019 vintage. This is a complex appellation at the best of times, principally because it is such a confusion of terroirs, from the pure limestone of the plateau, through varying degrees of clay and limestone down the slopes, the famous gravels at the western end close to Pomerol and the sands, of varying origins, which cover much of the rest of the appellation. The increasing area dedicated to Cabernet Franc (not to mention the occasional planting of Malbec and even Carmenère) adds another layer of intrigue. The progression of ripening, and thus picking dates, from west to east adds a third layer; looking beyond solely the St Emilion appellation, picking generally begins first in Pomerol, before progressing through the western parts of St Emilion, followed by the eastern plateau, followed by Castillon. And of course there is always the question of style; some domaines here have in the past leant towards late-harvesting and extraction, giving a ‘modern’ style. Today these wines are fewer in number and less extreme than they once were, but they are still there if you look hard enough (although of course, you may not wish to!).

In 2019 there is yet another layer of complexity which interdigitates with the variation in the picking dates, and that was the late-September rains. Those picking early, in the western parts of the appellation, were in many cases bringing in their Merlots before the beneficial rains arrived, meaning at least part of their Merlot harvest was super-rich fruit with high potential alcohols. Meanwhile those on cooler terroirs to the east, who always pick later, tended to pick with or after the rain; as a consequence they brought in fruit up to 1% lower in potential alcohol. There is a big difference between 15.5% and 14.5% potential alcohol in right-bank Merlot (and perhaps any wine), and in 2019 just a few days, and a few rain showers, was what made that difference real. 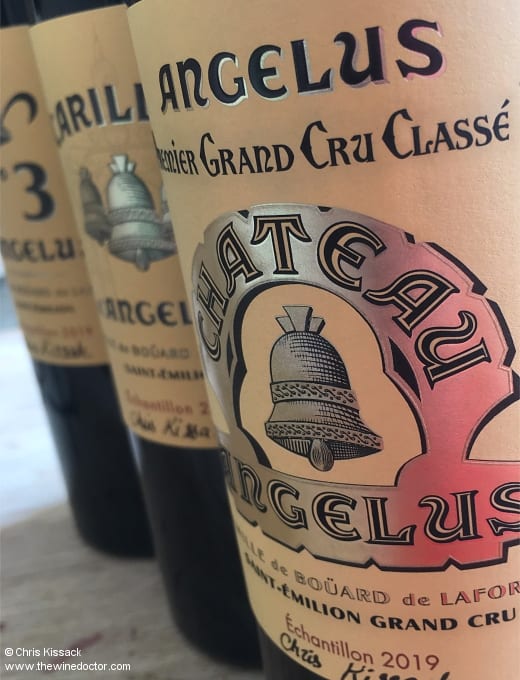 Because of the progression of picking, the rain-harvest complexity of 2019 is more relevant to Pomerol and the western and central parts of the St Emilion appellation, than the eastern appellation or Castillon. And at the premier grand cru classé level we should expect any turbocharged aliquots of Merlot to be demoted to the second wines, but it depends on the individual technical director, the estate, the blend, and of course it is not an option if all the harvest fits that description.