Driving up and down the Médoc you can not fail to be impressed by the many grand châteaux you will pass. From the understated maison and yet iconic dovecot at Château Latour, to the exuberant extravagance of Château Cos d’Estournel, these châteaux in many cases reflect the demeanour of long-deceased proprietors, and I don’t think it unreasonable in some cases to ask whether they also channel the style of the wine? With this in mind, I think it is always worthwhile exploring the history of these estates and their proprietors, in order to put the wine made in modern times into context.

Few can boast such a majestic outer shell as Château Ducru-Beaucaillou. The first château of some sort seems to have gone up during the 1730s, although the central part of what stands today was erected by the Ducru family during the first half of the 19th century, presumably replacing what stood before. The design, a long and low chartreuse, was situated directly over the barrel cellars, unusual for the Médoc. This arrangement is immediately apparent when visiting the property, which in my case is most commonly during the primeur tastings. The entrance utilised during the primeurs is via the grape reception area at one end of the building, and once through the doorway you descend directly into the cellars. Proprietor Bruno Borie has a taste for modern art, and the eye is immediately drawn beyond the vats to an animated basketball-player sculpted from fluorescent light tubes on the far wall, which at least makes a change from pictures of grapes. After turning a corner you find yourself in a long and thin tasting room which runs much of the length of the château. Once the tasting has finished, you leave by some hidden patio doors, finding yourself in the front gardens, once again looking up at the grandeur of the château. 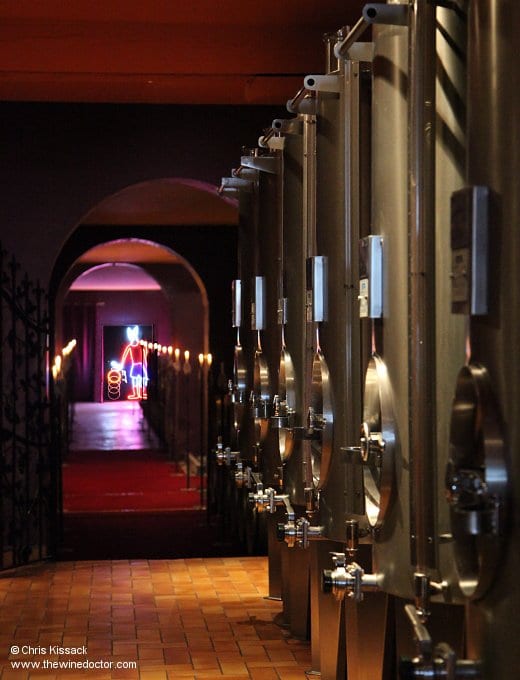 It is not this unusual journey through the bowels of Château Ducru-Beaucaillou that is the most memorable feature of the château though (even if the modern art is unique in the region). Rather it is the later additions, two towers added during the latter half of the 19th century, which lend the château a truly imposing air. The man responsible was none other than the famous Bordeaux négociant Nathaniel Johnston, who probably deemed the makeover necessary in order to impress his new wife, Princesse Marie Caradja de Constantinople, the daughter of Prince Constantin of Turkey. Following designs drawn up by the famous French architect Louis-Michel Garros, as well as the towers they also added two new wings, a conservatory and newly landscaped gardens.

There was a time when, sadly, the wine perhaps did not live up to the appearance of the château. Today, however, I would not say this to be the case. Since the mid-1990s Château Ducru-Beaucaillou has been on a role, turning out some superb wines worthy of the estate’s prestigious deuxième cru classé ranking, of its very fortunate position on the edge of the Gironde and, of course, worthy of the building’s grand scale.