Stacking and restacking some wine this weekend (well, I have to make room for the tidal wave of 2018 Bordeaux samples somehow), I came to the realisation that I have two same-but-different wines from François Pinon sitting side-by-side in my sparkling wine stack (that’s the stack I have to run to every Saturday afternoon when I start preparing dinner and realise I have a bulles-free frigo). In stack number one, on the left-hand side of the cellar, I found three bottles of his Vouvray Brut in the 2012 vintage. While in stack number two, on the right-hand side, I found six very recently delivered bottles of his Vouvray Brut in the 2012 vintage.

And the difference? Well, as is also the case at a number of other Loire Valley domaines, François Pinon doesn’t disgorge his sparkling wines in one single operation; recognising that the wines improve with time spent sur lattes he tends to disgorge in batches, according to the demands of the market. Before continuing, I think I should take a moment to explain sur lattes, as I use this phrase quite frequently and I am aware it might not be familiar to all. The term originated in Champagne to describe bottles that had finished their second (in-bottle) fermentation and were in storage awaiting disgorgement, the process which removes the sediment (the lees, which is mostly yeast detritus) from the finished wine. The bottles would be stacked in a space-saving manner in huge piles, each layer separated only by thin wooden strips or ‘lathes’ (lattes in French). As a consequence, the wines were said to be sur lattes (in other words, on the lathes). 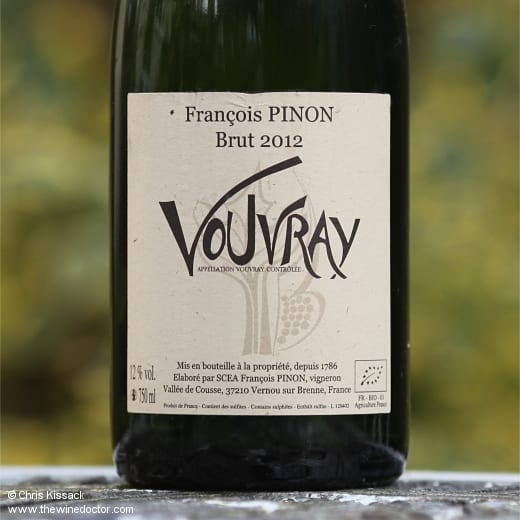 Today sur lattes is used to describe any wine resting between the end of the in-bottle fermentation and the disgorgement, regardless of where and in what manner the wines are stored. The significance of the sur lattes period is that the wine at this stage is in contact with the lees, analogous to the time wines in Muscadet spend sur lie. As we know from the long-lees-aged wines, be they cru communal wines from Clisson, Gorges and so on, or the special cuvées such as Origine from Domaine du Haut Bourg, lees-contact can have a profound impact on the character and longevity of the wine. And this is what differentiates the two wines I found sitting in my cellar. The first, featured here, I bought back in 2016, and it will have spent about three years sur lattes. The second bottle was disgorged this year, (one of the few good things to come along in 2020), after seven years on the lees.

So this weekend I popped the bottle from the left-hand stack, the 2012 François Pinon Vouvray Brut disgorged after about three years sur lattes, and then aged in my cellar post-disgorgement for another four years. In the glass this shows a pale and polished lemon-gold hue, with a fine central bead. I find a quite beautiful smoky purity on the nose, filled with the scents of crushed limestone minerals, dried citrus fruits and apple slices laced with honeysuckle and white freesia. The palate is just an absolute delight, starting off with creamed citrus fruits with a stony edge, accompanied by a vivacious acidity which cuts through the minerally fruit like a laser, all swirled in a delicious and focused mousse. This feels so expertly integrated, with finely grained substance, and it has some length too. I haven’t mentioned (today, anyway) what a challenging vintage 2012 was in Vouvray, but it most certainly was, and this is a fine result in such a year. 94/100

There are no prizes, by the way, for guessing the identity of next week’s Weekend Wine. A late-disgorged sparkling wine from Vouvray, perhaps? (14/12/20)