More than a decade has passed since I first called in on Bernard Fouquet at Domaine des Aubuisières, and I still recall my difficulty in locating his cellars on that inaugural visit. Having circled the town of Vouvray at least three or four times, I eventually gave up and instead went to knock on the door of Catherine Champalou (where I also had an appointment, but later in the day), and after tasting with her she was kind enough to give me directions to Bernard’s cave. Looking back I now wonder how I could once have gotten so lost in this little town; Bernard’s domaine is fairly central and there are plenty of easy landmarks, but any new environment has the potential to confuse, and the unfamiliar streets of Vouvray certainly managed to send me dizzy on that day. Not so, however, ten years later. On my most recent visit to meet and taste with Bernard, I arrived at his cellars dead on time, making not a single wrong turn on the way.

The appellation of Vouvray, rather like Sancerre, is one of valleys and slopes, with the broad plateau above. The vines lie on the slopes and the plateau, while the appellation’s major settlements – the central one being Vouvray, flanked by Rochecorbon downstream and Vernou-sur-Brenne upstream – all worm their way up the narrow valleys. It is half-way up the Vallée de Nouy, which runs in a roughly north-easterly direction behind Vouvray itself, that Bernard’s cellars are to be found. There are some easy landmarks here; the entrance to Clos Baudoin, once exploited by Poniatowski but now the exclusive property of François Chidaine, is just 150 metres down the road. Indeed, behind the modern external facade of his roadside cellars Bernard (pictured below) has a traditional cave, which runs back into the limestone rock directly beneath the vines of Clos Baudoin, which sits above and behind the cellars. 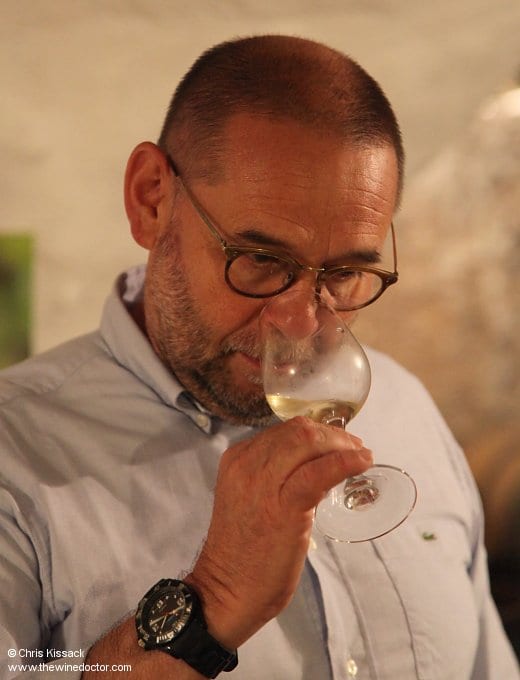 Up over the top of the other slope of the valley, to the south, is the lieu-dit Le Bouchet, where again Bernard owns vines (as again does François Chidaine). Beyond that is the famed Clos du Bourg, the cemetery and church. Plenty of landmarks then, and no need to get lost. Nevertheless, Bernard’s domaine is rather more complex than this simple introduction might suggest; he owns more distant plots in and around Vouvray, including a very significant parcel on the première côte alongside Domaine Huet and Philippe Foreau, and he also has a very large négociant operation (hence his large and very modern facilities on the Rue de la Vallée de Nouy). In this profile I attempt to cover all aspects of Bernard’s work in Vouvray, starting of course with the history of the domaine.