After a little run of young vintages from both the Loire Valley and Bordeaux in my Weekend Wine slot, and after tasting countless young primeur samples from Bordeaux 2020, and a not-quite-countless number of samples from the Loire Valley in 2020, it was good to be reminded of two things this weekend. First, while many young wines have their merits, and I enjoy tasting the newest releases from both my favourite regions, when it comes to drinking pleasure these young wines can’t compete with the mature complexity of an older wine.

Secondly, while the Loire Valley is rich in famous appellations it is also full of obscure and occasionally idiosyncratic gems which, for me, give the region its soul. Sancerre, Savennières, Chinon and Muscadet are wonderful appellations, but to fully grasp the Ligérian raison d’être you also need to get to know all the oddball varieties, such as Romorantin from Cour-Cheverny and François-Saint-Meslier from Touraine, as well as all the less well-known appellations, from the Atlantic wines of the Fief-Vendéens to the mountain wines of the Côte Roannaise.

The wine which reminded me of these two vinous aphorisms? As if you didn’t already know, it was an aged rosé from the Cabernet d’Anjou appellation. 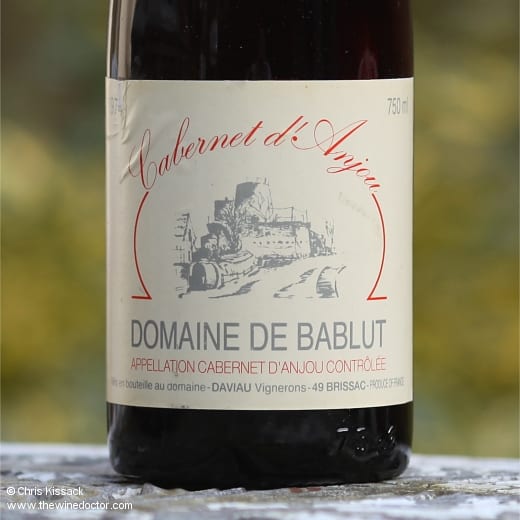 Cabernet d’Anjou is a style which grew out of the region’s cafe culture, where thirsty vignerons (and no doubt everybody else) would refresh themselves with a glass of rouget, or vin de café as it was known. This light red wine was the result of early picking of field blends with little in the way of maceration or élevage, and it was far from unique to the region. In many parts of France subsequent developments in both vineyard and cellar saw the wines deepen in colour and concentration (and thus in Bordeaux clairet became claret). This also came to pass in Anjou, but the region first went through a significant rosé phase, the wines becoming lighter in colour, and maybe a little sweeter.

And thus both Rosé d’Anjou (initially focused mainly on Grolleau) and Cabernet d’Anjou (no need to tell you the varieties here) came into being, two appellations of huge commercial and historical significance to Anjou. In a region that favours wines with residual sugar, it is perhaps not surprising that both styles tended to sweetness (the relatively modern fashion for dry rosé was the stimulus for the creation of Rosé de Loire). The appellations, signed off in 1957 and 1964 respectively, demand at least 10 g/l residual sugar, although most serious styles of Cabernet d’Anjou tend to more than 30 g/l, and it is surely this which helps the wines age so convincingly. Some, such as the 1980 vintage, could even be labelled as moelleux. There are a number of domaines with a reputation for the style, but Domaine de Bablut is one of the best.

The fruit for the 1974 Cabernet d’Anjou from Domaine de Bablut was picked as I was settling into my first year at primary school, which says feels like a lifetime ago (because it is!). In the glass it has a bronzed and toasted hue, rather like an old amontillado. After close to fifty years beneath the original cork it is perhaps not surprising that it shows a little funk at first, which then narrows down into a very fine bead of oxidation as the complex character of the nose opens up. This never completely disappears, but neither does it dominate, and it allows an interesting array of scents to come to prominence, including notes of preserved lemons, green olives, toast and white pepper. The palate is textured, still evidently sweet and gently grained with great substance, a soft acidity and a finely polished presence which only improves the longer it is exposed to the air. From starting off rather funky, this ends up in quite lovely place, with intertwined notes of savoury green olive, cigar box, toast, honeyed almonds and white pepper. A delicious balance and freshness – even with that tinge of oxidation – for its age, and it has great length too. And it is so very Ligérian. 92/100 (5/7/21)