Dig deep into the nooks and crannies of the Anjou vineyard and you can find some wonderfully drinkable curiosities. This weekend I looked beyond my usual ports of call in Anjou, familiar names such as Richard Leroy and Pierre Ménard, one renowned and the other up-and-coming but both making exemplary dry Chenin Blanc, to look at what else Anjou and its related appellations can give us. There is a red side to Anjou of course, not just straight Anjou but Anjou-Gamay, Anjou-Villages and Anjou-Villages-Brissac. There is even room for sparkling wines in the Anjou appellation, although I can’t recall the last time I clapped eyes on a bottle of méthode traditionnelle Anjou Mousseux.

And, of course, there is rosé. There are two principal rosé appellations in this corner of the Loire Valley, these being Rosé d’Anjou, where varietally just about anything goes, and then the rather more focused Cabernet d’Anjou, which as the name suggests is made exclusively from Cabernet, either Cabernet Sauvignon or Cabernet Franc, or indeed a blend of the two. There is Rosé de Loire made in the region too, of course, but this can come from just about anywhere in Anjou or Touraine, whereas the two Anjou rosés originate from exactly the same zone as the dry white or red Anjou appellation.

Rosé is, in this region at least, a relatively recent invention, dating back only to the early years of the 20th century. Opinions on who first came up with the idea differ, but writing in Les Vins de Loire (Parisienne d’Editions Techniques et Commerciales, 1956) Pierre Bréjoux, an author but also for many years the Inspector General of the Institut National des Appellations d’Origine, recalls that it was a Monsieur Daviau-Rozé from Brissac who broke the mould. He was the first in Anjou to present a rosé made from Cabernet for judging, and Pierre’s words suggest that this occurred sometime around 1910, give or take quite a few years. Up in Saumur, however, a vigneron named Monsieur Taveau apparently beat him by a few years, producing his first Cabernet-based rosé in 1905. From 1935 through to 1955 Cabernet d’Anjou in particular was popularised in the long-running French radio comedy La Famille Duraton, leading up to the creation of the Rosé d’Anjou and Cabernet d’Anjou appellations in 1957 and 1964 respectively. 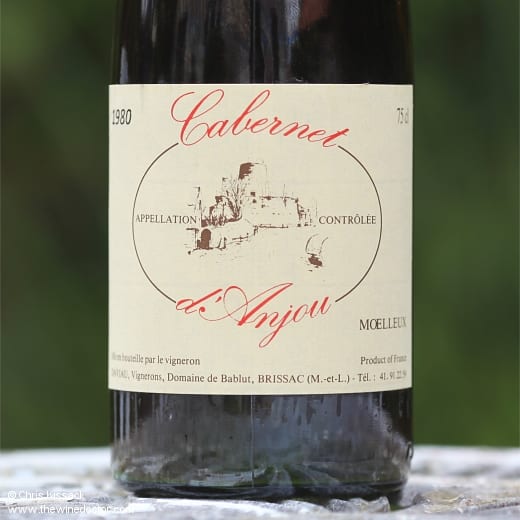 One very strong feature of the two principal rosé appellations in Anjou is that, unlike the broader and drier Rosé de Loire appellation, both Rosé d’Anjou and Cabernet d’Anjou demand a little residual sugar, a minimum of 10 g/l being stipulated. Why might this be? The answer to this question is lost to time, but one possibility is that the pioneering early-20th-century producers of rosé felt it was necessary in order to balance the acidity in the fresh-picked red varieties. Equally valid as an explanation, and I can’t help thinking perhaps rather more likely, is that this is Anjou. Dry wines might be de rigueur in Savennières these days, but go back a few decades and just about everything made in Anjou, Savennières included, carried some residual sugar. Why not the rosé as well?

While 10 g/l is the minimum, some vignerons like to go a little further. While the vast majority of the wines are intended for drinking young, and can be delicious in that vein, as a consequence of higher residual sugar – up to moelleux level at times – some of the wines can age surprisingly well. Achieving the desired level of sugar was not a challenge; while rosé came to rule Anjou, accounting at one time for more than half the region’s production, the centre of operations was at Martigné-Briand at the top of the Bas-Layon, a stone’s thrown from the Coteaux du Layon vineyards and of course Bonnezeaux, deep within sweet-wine country.

No self-respecting account of Cabernet d’Anjou would overlook the wines of the Daviau family (surely related to the aforementioned Monsieur Daviau-Rozé?) at Domaine de Bablut; the Daviau wines, such as the moelleux version pictured above, are perfect if a bit of cellar time is what you have planned for your rosé, even if that cellar time stretches out to forty years. The 1980 Cabernet d’Anjou Moelleux from Domaine de Bablut has a quite amazing colour in the glass, quite unlike any other wine I recall tasting in the last few years. It shimmers with a gloriously deep quinacridone sienna hue (that should have you turning to your colour guides for a clue) in the glass, sitting somewhere between red and gold, but not quite committing to one or the other. The aromatics are surprisingly vibrant and pure, with scents of biscuit, grilled oranges and red cherry, pure and with a touch of peppery spice. The palate starts off appropriately full and polished, seemingly keen to show its moelleux pedigree even if it is not particularly sweet, while through the middle it shows a savoury freshness and textural grain. It feels peppery and lightly sweet with a touch of bitterness, filled with notes of grilled orange and oatmeal biscuit mirroring the nose. It is holding up exceptionally well, and while it feels a little drier on the finish than it does in the middle of the palate it keeps its end up very nicely, with just a little twist of residual sugar to soften it throughout. All in all it is distinctive and unexpectedly good. I may have to see if I can uncover some similarly aged bottles lurking in my cellar. 94/100 (20/7/20)