Domaine des Deux Vallées is a fairly modern creation, the work of Philippe and René Socheleau. Its story really begins in 2001, the year this father-and-son team first stepped into the world of wine with the purchase of vineyards and cellars in and around the town of Saint-Aubin-de-Luigné. Up until this moment the Socheleau family had only a tangential involvement with the vine and wine; René’s wife came from a family of vignerons, and there was a cousin who owned some vines, but otherwise they were newcomers. Up until this moment René was known only as a fruit grower, the proprietor of one of the region’s many huge apple orchards.

Looking for a new direction, it was Philippe who was the driving force behind the acquisition of Domaine Banchereau, the structure of which they changed significantly after their purchase. Before we come to the domaine’s modern story, however, this is perhaps a good moment to explore the origins of this domaine a little further.

Domaine Banchereau was established by Paul Banchereau in 1950, starting out in cellars located on the Rue du Canal de Monsieur in Saint-Aubin-de-Luigné (pictured in the distance below), a stone’s throw from the waters of the Layon. Indeed, Canal de Monsieur is a reference to Louis XVIII (1755 – 1824) who underwrote the canalisation of the Layon during the 1770s after his brother, Louis XVI (1754 – 1793), refused to do so. 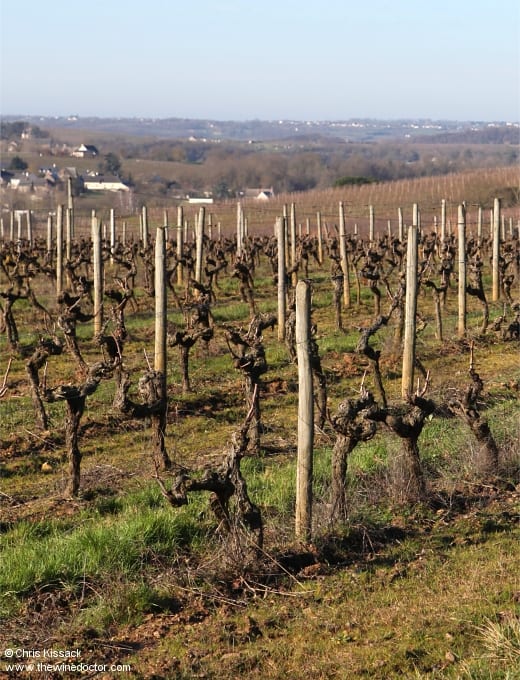 Working from these well-positioned cellars Paul started off with 4.5 hectares of vines, but during the years that followed the area of vines at his disposal increased dramatically. He was no small-scale vigneron turning out micro-cuvées of Anjou Blanc and Coteaux du Layon; Paul’s approach to winemaking was somewhat more industrial, and by the 1980s he was tending over a hundred hectares of vines. From these he was turning out close to 3,000 hectolitres per annum, more than even some large classed growth estates in Bordeaux would produce in a single vintage.