Ask any Loire addict to list the top handful of domaines for Muscadet and without doubt there is a quite small selection of names that will consistently dominate the list. Some are already profiled on this site – Luneau-Papin would be up there, as would Guy Bossard’s Domaine de l’Ecu, and I would be surprised if Jo Landron of Domaine de la Louvetrie did not pop up as well. But there is one domaine, an estate and winemaker regarded by many as the leader of the appellation, that would have to be on the list. I am thinking of Domaine de la Pépière, home to Marc Ollivier. 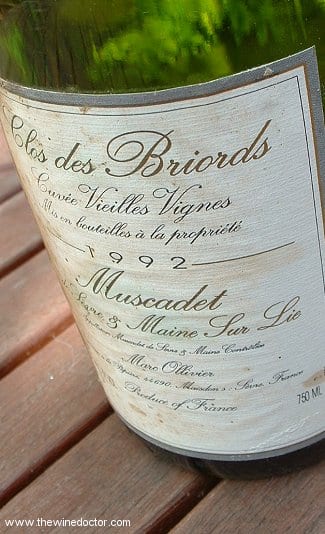 This estate is one I have not yet profiled on Winedoctor – an issue of time and tasting history rather than oversight or omission. I simply haven’t had the chance to get around to it. I certainly have a number of these wines in the cellar, and I have been impressed by them – I too would put this estate at least near the top, based on what I have tasted. Having espied the man himself at the Salon des Vins de Loire earlier this year, I had intended to stop off at his stand and taste the latest releases. But time ran short on the last day, and I missed my chance; he is top of my list for next year.

In the meantime, while my 2006s and 2007s make their way to the top of my drinking pile (they are battling it out with any number of other Muscadets, which I seem to have bought a lot of recently) my short account of this wine instead of a full profile of the domaine will have to suffice. Together with the Granite de Clisson, the Clos des Briords is one of Olivier’s two top cuvées. As the label declares it is a Vieilles Vignes cuvée, hardly surprising when the vines of the Pépière vineyards range from 40 to 80 years of age throughout; the vines in question here were planted in 1930. Although remarkable for their age, it is also noteworthy that Ollivier’s vineyards are genetically rich, the vast majority of his peers having replanted single-clone vineyards long ago. Whereas most of these vineyards have shallow, thin soils over hard granite, the Briords site is marked by a deeper clay and sand soil laid over a friable granite subsoil; this combination tends to moderate soil moisture, giving a smoother development of the vine and ripening of the fruit throughout the season. The grapes are harvested by hand and then fermented using thermo-regulation by natural yeasts without skin maceration, shortly followed by a racking off the solids. Thereafter there are eight or nine months on the lees in steel before bottling.

The end result is a fabulously fresh wine which although approachable young also has great potential for age, some say several decades. This is not madness; although I have not yet tasted a Pépière cuvée with that sort of age I have tasted examples from Luneau-Papin, and they were very fine. In an attempt to put that right I pulled this wine from the cellar; although not quite at the “several decades” stage being of the 1992 vintage does mean that it has 17 years under its belt, which is I suspect longer than most would aim for when tucking away Muscadet in the cellar. Sadly the first bottle was musty, initially suggestive of rot or something else very dirty – it wasn’t simple cork taint, but in truth I’m not sure what. There were, however, some appealing aromas and flavours swirled around this disconcerting character. Nevertheless I moved on; the second bottle, thankfully, showed a much cleaner character, although it also seemed tighter and less giving than the first. In the glass the wine has a lemon gold, vibrant appearance, with just a hint of green. The nose has a complex array of aromas, starting off with just a little liquorice. It soon morphs into a captivating style with elements of iced melon, rosemary, and stone fruit. Fresh, richly acidic, fairly weighty and yet still very fresh on the palate, this has a very good, food-friendly, crisply defined style. Slightly bitter, with punchy grapefruit character, supple flesh beneath and a dry finish, this is a wine that certainly has some challenging aspects, although I enjoy it all the more for that. And I suspect there is still a lot of development to come here. On the whole, a very good wine. 17+/20 (10/8/09)