This week another wine from one of Muscadet’s leading domaines, Domaine de la Pépière, an estate which I introduced to these pages with a recent tasting of the 1992 Clos de Briords, a Weekend Wine just a few weeks ago. I make no apology for returning to this estate after such a short interval; proprietor Marc Ollivier produces some of the greatest wines of all the Muscadet appellations, and so having looked at a mature example I thought it only appropriate to look at a more contemporary release which is perhaps more likely to have wider availability.

This is a very special bottle as it represents an effort not just by Ollivier but by a number of leading viticulteurs to take Melon de Bourgogne and thus the wines of Muscadet beyond what they are currently commonly perceived to be capable of. This loose grouping of wines and estates has been labelled the Troisième Niveau, meaning “third level”, with I would assume non sur-lie Muscadet appellations and then the sur lie wines to be the first and second levels respectively. There are a number of familiar names involved alongside Marc Ollivier and his Granite de Clisson; Pierre Luneau-Papin and his Excelsior cuvée is one. Although there is no uniformity in terms of labelling or naming these troisième niveau cuvées there is curiously a uniformity in the bottle, heavy-weight affairs moulded with the fleur de lys. More important than any aspects of packaging, however, are the nuances of viticulture and vinification (as well as the taste of course!) that distinguish this wine from a myriad of other Muscadet cuvées. 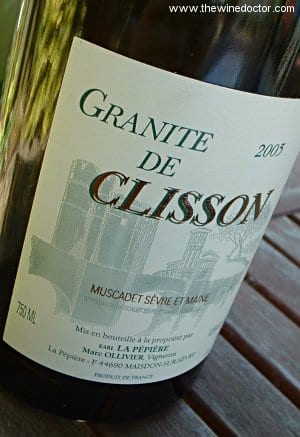 Ollivier’s example is sourced from vines planted on granite, a terroir which can yield excellent wines and which accounts for only 5% of the Muscadet vineyard. For others terroir is also important, as I have already extolled in my profile of Luneau-Papin, who harvests vines planted on the Schistes de Goulaine for his cuvée. Yields are controlled and must not exceed 47 hl/ha, and in the cellar the wines must rest on their lees for at least 18 months. This last stipulation has the curious side effect of generating wines which can not legally by labelled sur lie. This is because the appellation regulations stipulate that the sur lie designation can only be applied to wines that, to quote the regulations verbatim, doivent n’avoir passé qu’un hiver en cuve ou en fût, so the wines can spend only one winter in vat or barrel before bottling. The period for bottling is between March 1st and November 30th in the year following the vintage, but Luneau-Papin keeps his Excelsior en cuve for 30 months, and Ollivier does the same with this cuvée for two years. Neither wine, therefore, should be declared as sur lie, despite having spent several years being just that, sur lie!

And so to the wine, the Domaine de la Pépière Muscadet Sèvre et Maine Granite de Clisson 2005, an impressive wine aromatically, with purity on the nose, citrus fruits combined with minerality. There are richer overtones, honey and cream, but the texture and substance is always bright and alert, with wisps of smoke and pepper. Fresh, pure and defined on the palate, beautifully composed, perfectly balance, with notes of wet stone and elderflower, lime and tarragon, this is an exotically styled wine with great substance and depth. Finely delineated in the finish, I believe it would cellar well too. That is perhaps hardly surprising, as one of the aims of the Troisième Niveau group is to demonstrate Melon’s potential, particularly in terms of gravity and ageing potential, when handled in the same fashion as other noble varieties. This certainly has plenty of promise. An excellent wine. 18+/20 (19/10/09)