Situated on the road that runs south out of the town of St Emilion there is a most remarkable château, one which feels inherently part of the vinous landscape and yet one which also feels, to this day, slightly incongruous. It is perhaps the town’s only good example of gothic architecture, and it is this that sets the château apart from its environment. The building seems improbably narrow and is of some height, at least three stories, four if we include the roof space which is large, the gables lofty and pointed. Rows of tall windows on one end are capped with decorative mouldings of gothic pointed archways, while those along the road are dressed with archivolts and there is even a miniature rose window. Perhaps the most striking feature, however, is best viewed from a distance, as here the many carved finials and crockets that decorate the roof can be appreciated. They give the building a strikingly different silhouette to anything else you would encounter in this town which, in all other instances, speaks so clearly of its Roman origins.

This is, of course, Château La Gaffelière (pictured on the next page), a domaine which as the very appearance of the château itself suggests is steeped in history. Its construction dates to the at least the 15th century, although the story of habitation and viticulture at this spot actually begins one and a half millennia before that. There is evidence of an ancient settlement here, as archaeological excavation has unearthed numerous artefacts from the era of Roman occupation, as well as evidence of a Gallo-Roman villa which was decorated with tesserae mosaics (pictured on the next page) today on display in the Château La Gaffelière tasting room. These mosaics clearly depict the planting of vines, presumably a local activity. 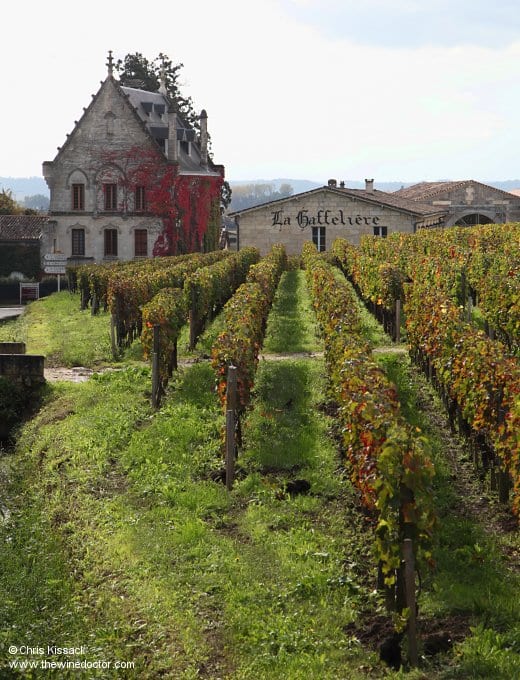 Many have tried to tie the presence of what was surely a lavishly appointed villa with the tale of Ausonius, the Roman poet that some believe lived in the region (even though his own writings suggest his vines were planted within sight of the Garonne) and after whom Château Ausone would appear to be named. This would appear to be, however, nothing more than conjecture; we have no knowledge of which Roman lived here, and we know nothing of their viticultural efforts. For us, the story of Château La Gaffelière really begins in the Middle Ages, when it has a common origin with Château Canon-la-Gaffelière, which lies just to the south, slightly further down the road. For this reason, these two profiles have, to begin with at least, a shared history, one that begins with a leprosarium that stood on this spot five or six centuries ago.