After last week’s foray into Chenin Blanc on schist, with a wine from Savennières, this week I head back upriver to one of the benchmark appellations (or should that simply be the benchmark appellation?) for Chenin Blanc on limestone, which is – as I am sure you have already noted – Vouvray. While the two cuvées differ in their respective origins there is one thing (other than the obvious, the grape variety) they have in common; they are both newly introduced cuvées. The 2019 vintage was the first for Damien Laureau’s young-vines cuvée L’Alliance, which has replaced La Petite Roche in his portfolio. Chez Pinon we have another debutante cuvée, named Spontané.

The late François Pinon’s reputation probably rested most heavily on his sweet wines, at least initially (true for many in Vouvray, I suppose), although in recent years his demi-sec styles have also shone, and I think there remains great potential in the increasingly sec cuvée from Les Déronnières. The domaine should not, however, be overlooked when it comes to sparkling wines; indeed, I think I have drunk more sparkling Vouvray from François Pinon over the years than any other domaine in the appellation. The only possible contender would be Vincent Carême, and nobody else comes close. These wines have long been providing excellent drinking, probably because François always looked for the same quality fruit, and put in the same effort, for his sparkling wines as he did for his famed demi-sec and moelleux cuvées. 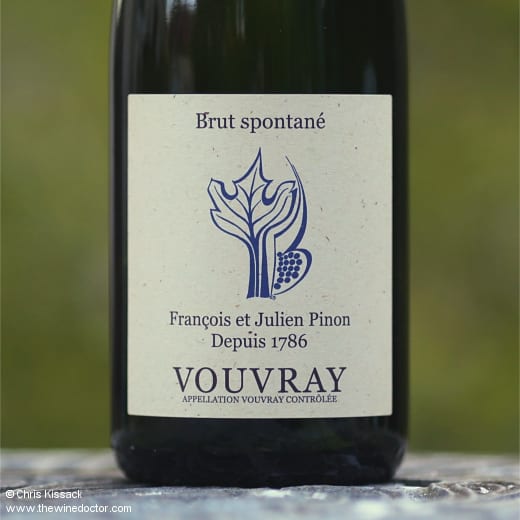 François produced a range of styles of sparkling Vouvray over the years, some single vintage and some non-vintage, some with no dosage, some more conventionally brut, and some with higher levels residual sugar. While the style might vary, though, François has always stuck to a traditional method, starting off with a first fermentation in stainless steel, and then a second fermentation in bottle induced with the addition of the liqueur de tirage. In did once try his hand with a pétillant natural style, with just one fermentation starting in cuve and finishing in bottle, but it seems it didn’t work out. If I recall correctly that was back in 2014, and it would be 2019 before he would try again. The result of this new effort is his Brut Spontané cuvée.

Making a pétillant naturel cuvée with the Vouvray appellation is not as straightforward as you might think. First, the appellation’s rulebook states that sparkling wines must be made through a second fermentation in bottle; I imagine the interpretation of “second fermentation” might be key here. Secondly, wines have to be held in élevage for twelve months from the date of bottling, and obviously this goes against the pét nat philosophy of early disgorgement and consumption. Early disgorgement and release is the reason why Alexandre Monmousseau’s Tintamarre cuvée, which he reluctantly markets as a Vin de France, was refused the appellation. Nevertheless François and Julien Pinon have done it, and their Vouvray Brut Spontané is a pétillant natural cuvée from the 2019 vintage (although as the bottles aren’t vintage dated I have stuck with the non-vintage designation). Fermented dry, with a residual sugar below 3 g/l, this has a pale straw-coloured hue in the glass, with a very singular central bead of bubbles. This is matched by a beautifully fresh nose, quite floral with scents of white freesias, honeysuckle and chamomile, with crisp apple and a touch of orange citrus zest as background scenery. The winsome nature of the nose acts as a prelude for the delicately framed palate, which comes in a very bright style, floral and apple-scented, with a crisp pétillance and vigorous acidity. This is the essence of spring in a glass, bursting with life and scented potential, and it seems perfect for Easter Weekend. Or indeed any weekend. 92/100 (5/4/21)