There are some obvious destinations when looking for a Muscadet to drink, top names such as Domaine de la Pépière, Pierre Luneau-Papin, Domaine de l’Ecu and others. I have these pretty well covered on Winedoctor, with some detailed profiles, recent updates and plenty of associated tasting notes. More recently I have been throwing my net further afield, trying to take in other domaines, some famous and long-associated with the region and the wines, some perhaps less well known. Some I have met and tasted with, as in the case of Bruno Cormerais, while others, such as the wines of Domaine de la Sénéchalière have been the subject of armchair-based exploration. Yes, armchair-based. I would like you to conjure up an image of me in a giant high-backed armchair, surrounded by fresh oysters and scallops served with Monique Luneau-Papin’s beurre blanc, all washed down with an array of Muscadets poured by my butler. The reality is not like that at all of course. Nevertheless that’s the image I would like you to have. So please try.

Now that the scene is set, let’s move onto the domaine and the wine. Claude Branger of Domaine la Haute Févrie certainly fits into the ‘famous and long-associated’ category. A quietly-spoken vigneron, his domaine is not huge and his profile much lower than some of the names closer to the top of this page, but his wines are of no lesser interest to me. He has 10.2 hectares of vines centred around Maisdon-sur-Sèvre, right at the heart of the Muscadet Sèvre et Maine appellation, and a stone’s throw from Clisson, Gorges, Saint-Fiacre and La Haye-Fouassière. With his son Sébastien the domaine is run along the lines of sustainable viticulture, following the guiding words of Terra Vitis. This might be a less rigorous approach than some others in the region, but it does not to my mind invalidate the wines. Harvest is by hand, and the portfolio manageable (certainly more so than some others, such as that of Marc Ollivier, who seems to be adding several new cuvées every year at the moment). 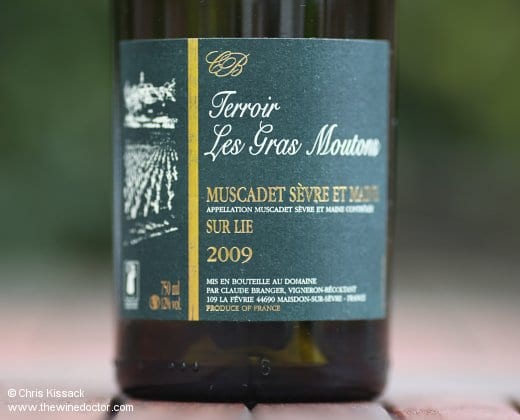 There are some interesting-looking site-specific cuvées here, as well as a vieilles vignes cuvée modestly named Excellence, from vines aged between 50 and 86 years old planted on gneiss and orthogneiss terroirs. All are bottled sur lie, the Brangers obviously favouring the traditions of the region over troisième niveau experimentation. One that particularly caught my eye though was Terroir Les Gras Moutons, not least because I am already familiar with this lieu-dit from the portfolio of the aforementioned Marc Ollivier. That is a wine I have featured in the past, when the 2009 Pépière Les Gras Moutons (same vintage as the wine featured here, I note) was my Weekend Wine. Although the terroir here is gneiss, Claude’s 7.2 hectares (rather more than Ollivier) include several planted on a seam of amphibolite. The vines range from 40 to 70 years of age and, as with the rest of the domaine, their fruit is hand-picked.

As for the wine itself, the 2009 Terroir Les Gras Moutons from Domaine la Haute Févrie has an attractive nose filled with sour-lemon aromas, certainly showing a fresh character but also suggestive of a good depth of fruit. Behind these lemony notes there is a vein of fresh-cut pear, pithy and also faintly minerally. There is a good substance to the wine on the palate, with a barley texture to the middle giving it quite a weight here, but it is also fresh despite being quite broad and rich. The minerality makes only a very faint seam through the middle of the wine though, so that is one less appealing distinction to be made. It all ends with a sappy, lip-smacking cut. Overall it has a slightly soft, effusive feel to it; regardless of such nuances though, there is no denying that this is very different from the granite style of Muscadet, even if with a little air it does feel a little more grippy and substantial. So overall, certainly a good wine. Alcohol 12%. 16/20 (21/5/12)