Last week’s foray into organic St Nicolas de Bourgueil featured a wine with a restrained, old-school character, and a modest (by today’s standards) alcohol level of just 12.5%. This week I thought I might turn things around with a look at a wine from the other end of the spectrum. Not just a different appellation and different vintage, but also a decidedly different style.

The domaine in question is no stranger to these pages; I have followed Château Pierre-Bise for many years, at least since my first visit to the domaine back in 2003, and probably longer than that (I might know better if I had not thrown out my very first pre-Winedoctor tasting notebooks twenty-odd years ago). On that visit Claude Papin bundled me into his car and drove me out into the vineyards. At the time I did not know the region so well and was immediately disorientated; it was only years later, examining the photographs I took, that I was able to deduce Claude had driven me down to his parcels on Les Rouannières, a little micro-plateau sandwiched between two streams which run down into the Layon. Beyond the stream to the east are the vineyards of Emmanuel Ogereau (the source of his Vent de Spilite cuvée) and the vines of Les Treilles, now in the hands of Domaine Belargus. On the other side the stream to the west is Château Soucherie, beyond which lies Quarts de Chaume. In other words, this is a well-positioned vineyard. 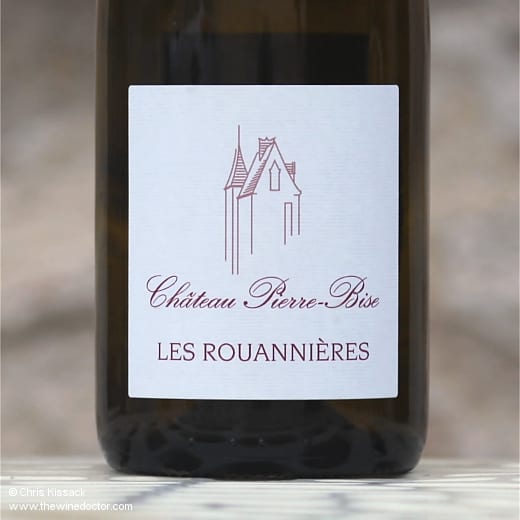 These days the domaine is managed by Claude’s sons, René and Christophe, who have not only Chenin Blanc in Les Rouannières to look after (for both dry and sweet cuvées) but also Cabernet Franc and a little Cabernet Sauvignon too. Underfoot there is a thin layer of topsoil, a mix of clay and degraded bedrock, the latter spilite or as it is also known in this locale pierre bise. It is a rock which, like schist, fractures easily, allowing for good rooting but also feeding the soils with a mineral component. There are 2.5 hectares of red vines planted here, aged 35 years on average, and comprising 70% Cabernet Franc and 30% Cabernet Sauvignon (although the blend in this vintage is a little different). The approach to cultivation is considered, with use of copper sulphate, seaweed and plant extracts, although the Papin family have always shunned viticultural certifications.

The 2018 Anjou-Villages Les Rouannières from Château Pierre-Bise is a blend of 90% Cabernet Franc and 10% Cabernet Sauvignon, picked by hand, 100% destemmed and then fermented by indigenous yeasts. The fruit enjoys a gentle three-week maceration with the emphasis on a delicate extraction, followed by a year aging in sandstone jarres. In the glass it has a dense and glossy hue which seems immediately compatible with the 2018 vintage, which was a year of warm excess. The aromatics are nothing short of remarkable, kicking off with some fairly classic themes including cranberry, blackcurrant and currant, all very proper for a cuvée dominated by Cabernet Franc, and I could say the same of the threads of mint and green peppercorn which quickly join them. Coming in behind, however, are richer notes which seem to me to reflect the character of the vintage, with layers of toast, coffee bean and dried black fruits, as well as a touch of orange zest. It is enticing, and the palate carries it all forward in a dry and savoury style, albeit one that is richly textured, toasted and full of grippy potential. This is a very good Anjou-Villages which bats away any memories of the old spicy and angular style Anjou is known for and replaces it with something more seductive and polished. The vintage helps, of course. The alcohol level also reflects the vintage though, declared as 15%, although this doesn’t come across on the palate. It’s a success, and whether you would rather drink this, or the more whiskery St Nicolas de Bourgueil featured last week, depends on your preferred style rather than any great difference in quality. 93/100 (14/6/21)