I have returned from the Loire Valley. I would like to say I have returned refreshed, although it would not reflect the reality of it. I was under no illusion that acquiring a maison secondaire in France would be a breeze, but the necessary work does seem to expand to fill every available moment. I returned last week via an overnight sailing, departing from Caen in northern France after 9pm, so I needed to leave my house by 5pm to get there in time. At 2pm in the afternoon I was still planting a new laurel hedge at the bottom of my property, a long-overdue project which I completed just in the nick of time.

That kind of every minute counts scheduling typified my recent trip, one marked by two periods of quarantine (one in France, one here in the UK) and multiple Covid-19 tests (all negative). As a consequence, despite a hankering to call in on some of the region’s vignerons, I had to bide my time and delay intended visits and tastings until some future trip. That did not prevent me uncovering some interesting wines though, including new vintages and new discoveries. One such encounter was this St Nicolas de Bourgueil, which I would like to tell you I encountered during a magical visit to a local caviste, one where the shelves groaned under the weight of Ligérian rarities from Clos Rougeard, Philippe Foreau, Louis-Benjamin Dagueneau and François Cotat, among others. 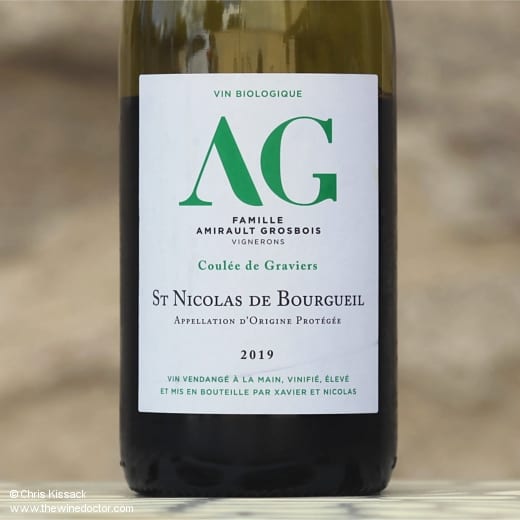 That would, however, be a lie. The truth is that I found it hidden among some much more dowdy bottles on the shelves of a Carrefour in Tours, after an enthralling visit to Ikea to buy everything from new bedding to garden umbrellas. If nothing else it is an illustration that you can find interesting bottles on the shelves of French supermarkets, even if there is sometimes not much wheat, and an awful lot of chaff.

While the domaine might not be immediately familiar, the two names involved are well-known to anyone interested in the red wines of the Loire Valley. Famille Amirault Grosbois is a joint project created by Nicolas Grosbois of Domaine Grosbois in Chinon, and Xavier Amirault of Domaine Amirault in Saint-Nicolas-de-Bourgueil, the latter vigneron perhaps best known for his Clos des Quarterons cuvées. Although seemingly unconnected, the two are in fact cousins, and they came together back in 2008 to create the Famille Amirault Grosbois label, which essentially operates as a high-end négociant dealing principally in organic wines from their home appellations (although they have looked further afield, into Anjou and beyond).

The 2019 St Nicolas de Bourgueil Coulée de Graviers from Famille Amirault Grosbois is 100% Cabernet Franc, certified organic, and sourced from several small parcels of vines planted on gravelly terroirs, as suggested by the name. The fruit is picked by hand, and fermented by indigenous yeasts. The élevage is modest and the result is approachable when young, as is the case for most wines from the appellation’s gravel soils. It has a good depth of colour in the glass, dark and shimmering. The aromatic profile oozes Ligérian classicism, with a gravelly fruit profile led by bright redcurrant and cranberry fruits, laced with notes of green peppercorn, leather and dry baked earth. It has a sense of eager freshness which continues on the palate, where a touch of garden mint and green pepper join the flavour profile, with a pithy phenolic grip, all set in a light-to-medium substance. It finishes short, and overall it feels sappy, cool and relaxed, with some sense of charm, and an intriguing touch of bitterness in the finish. It has enough old-school character to please Loire traditionalists, and I am sure the declared alcohol, just 12.5%, will raise a few smiles. All in all it is a juicy and easy-drinking success which went down well with an impromptu barbecue. And I should say it also works well with an afternoon of hedge planting – take my word for it. 90/100 (7/6/21)