From a geographical point of view, this weekend’s wine is not that far removed from last weekend’s, the Domaine Huet Vouvray Le Haut Lieu Sec 2009. I have made a short trek east, from the appellation of Vouvray which lies very close to Tours, into the Sologne Viticole. The Sologne plateau, home to as much arable agriculture and forestry as it is viticulture, lies on a narrowing isthmus of land between the Loire to the north and the Cher to the south. Perhaps the best known appellations to be found here are Cheverny and Cour-Cheverny, the latter home to the Romorantin variety of course, although to be honest many of the most interesting wines are found under the more generic Touraine appellation, or indeed they are often Vin de France. Some of the best known names include Thierry Puzelat, in Les Montils near the Loire, and Claude Courtois in Soings-en-Sologne. Despite the interest and variety offered here, however, this isn’t a viticultural region you will find discussed in any mainstream publication.

This wine is made by a young (by which I mean he is younger than me, of course) vigneron named Lionel Gosseaume. Lionel is based in Choussy, a small village near the Cher, and has 15 hectares to his name; these were not inherited, as you might have expected, as in fact Lionel purchased the vineyards and facilities from a retiring vigneron in 2007. What he acquired was mostly Sauvignon Blanc and Gamay, varieties typical of the region, although he does have a smattering of other varieties planted up. Very recently he has added some small plots of Côt and Cabernet Sauvignon to his holdings, although of more relevance to the wine featured here he also acquired in 2007 two small parcels of Menu Pineau and a variety I have not encountered before, Meslier-Saint-François. 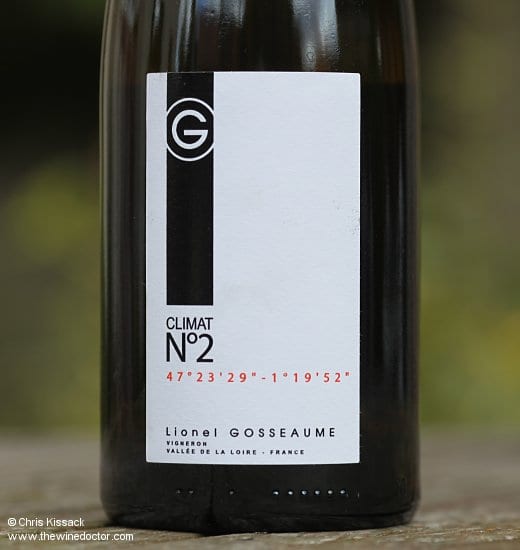 Like the somewhat better known (although hardly famous) Menu Pineau (which is named for its resemblance to Chenin Blanc, known locally as Gros Pineau, but it has smaller berries), Meslier-Saint-François is a ancient Loire variety. It first crops up in literature from the 16th century, when it is known as Gros Meslier, and it was regarded as a reliable cropper which provided good quality. The vines origins are known, it being a cross between Gouais Blanc and Chenin Blanc, one which occurred in the wild many, many centuries ago. Sadly, another feature that it shares with Menu Pineau is that in recent decades these varieties have gradually been crowded out by the ever-advancing march of Sauvignon Blanc, aided and abetted by appellation regulations which focus on this well-known, ‘international’ variety. This is or course a ridiculous stance, as there is not much appeal to a wine lake of commercial-level Sauvignon Blanc. Who will answer the call to produce more interesting wines using the Loire’s old varieties?

Happily, the aforementioned Claude Courtois and Thierry Puzelat do just that, with Menu Pineau. Tracking down an example of Meslier-Saint-François has been somewhat more challenging, but it is made a little easier by the work of Lionel Gosseaume, who has been carefully tending a 0.3-hectare plot of this variety. This is located in what Lionel calls Climat No. 2, and it is blended with Sauvignon Blanc in this wine, name for the lieu-dit of origin. The vines are aged between 30 and 35 years, the fruit once picked fermented in steel at low temperature, then held in tank for 29 months prior to bottling. In the glass the wine has a pale straw hue, offering nothing unusual. That cannot be said of the aromatics though, which are fascinating, exuberant and yet tight and weedy at the same time. There are aromas of stinging nettles and freshly pulled dandelions, but also sweeter element, the fruit profile suggestive of pears and peaches, sprinkled with notes of white pepper. The palate delivers more texture than would be brought to the table by a pure Sauvignon Blanc, the feel of it full and yet fresh, stony and yet slightly perfumed too. It feels ever-so-slightly minerally, has a touch of grip, leading into a rather appealing phenolic bite in the finish. It has a little length too. Overall, this is a fascinating, esoteric and very enjoyable wine. 16.5/20

As you will note the label above provides a grid reference which is the location of the climat in question, a novel and commendable idea. You can see the location by clicking this link to Google Maps. (16/9/13)