This week sees plenty of fresh Loire updates on Winedoctor, with a report on all the latest releases from Pithon-Paillé coming tomorrow, followed by a freshening up of my profile of Domaine de l’Ecu and a report on a tasting of Vouvray from Peter Hahn, of Clos de la Meslerie, later in the week. These latter elements, together with a forthcoming report on the dry and pétillant wines of Domaine Huet – coming in the next month or two – is probably what prompted my to open this weekend’s wine, the 2009 Vouvray Le Haut Lieu Sec from this very domaine.

As you may well already be aware, Vouvray is one of many French appellations to suffer the devastating visitation of hail this year. The storm came on June 17th, at about 5:30 am, and cut a very precise and destructive path through the vineyards. Some growers were in the clear, with not so much as a scratch on their vines, the aforementioned Peter Hahn being one such fortunate individual. Others saw their entire harvest wiped out, in particular François Pinon, which is particularly bad luck as I know François has a multitude of different plots scattered about the Vallée de Cousse, so you would naturally hope some had escaped. Others were somewhere in the middle, with destruction to some of their vineyards, but with other vines spared. This is the situation Vincent Carême and many others have found themselves in. 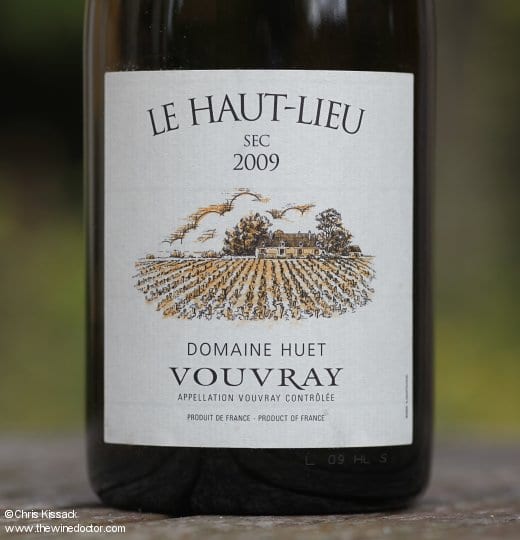 I spend a lot of my time thinking about Vouvray, something which will perhaps come as no surprise to you, but the town and its people have occupied my mind even more than usual following the hail. In the meantime, however, I suspect the mainstream wine press has, on the whole, all but forgotten this incident. They are, perhaps, more concerned with August’s hail in Bordeaux, which cut a huge swathe of devastation through the Entre-Deux-Mers, laying waste to thousands of hectares of vines, including just about everything at Château Bauduc which I visited only a year ago. And then, in Burgundy, there has been hail in parts, and flooding in others. Both of these regions have more vocal exponents than the Loire, and perhaps a broader following, and in the face of such news stories Vouvray’s story of devastation and of livelihoods lost soon fades into a distant memory, I suspect.

It is now more than two months since Vouvray’s hail, and perhaps now, in advance of the 2013 harvest, is a good time to reflect on what has happened since. Happily I can report that the vineyards are, on the whole, recovering. Nothing will bring the damaged vines to a point where they can produce and ripen fruit for the 2013 vintage (and where the damage is severe 2014 looks in doubt as well), but warm and dry weather has meant that these vines have at least been able to heal, and generate a little new growth, without succumbing to disease at this vulnerable time. In addition, it has been business as usual on those plots that were undamaged. Tania and Vincent Carême, for example, report that their undamaged vines are carrying a good crop, and they project a harvest on these vines of at least 25 hl/ha, which is greater than the average yield for the domaine in 2012.

Reports that there won’t be any 2013 Vouvray are, therefore, premature and almost certainly incorrect. One or two unfortunate domaines will have to sit out the vintage, but I certainly expect to be seeing some picking when I next visit the region in October, to take a look at the harvest, and I expect to be tasting some 2013s when I head over for my usual February tastings next year. But for now, it is back to 2009, with the Domaine Huet Vouvray Le Haut Lieu Sec, which has a pale hue, and it still showing a very youthful character. It has a beautiful fruit purity on the nose, dominated by orchard fruits, especially pear skin, along with notes of vanilla, face cream and a faint seam of melon-tinged honeysuckle. It also has a nicely minerally, white-stone streak. There is a lovely substance on the palate, with balance, tension and grip on the start, and a superb energy through the middle and into the finish. It has a great texture, being a little rich and certainly reflecting the higher residual sugars in the secs of modern-day Huet but that doesn’t bother me, and it has confident grip too. It culminates in a pithy, concentrated, really long finish. In short, excellent. 17.5/20 (9/9/13)